As we’ve been outlining over the last few weeks, the auto-loan industry is increasingly looking like Subprime 2.0: the needle that will pop the credit bubble.

Since 2009, roughly 1/3 of all new auto-loans have been subprime. That in of itself is bad, but we are now discovering that the industry in general has a problem with fraud (shades of the Housing Bubble) as well.

As many as 1 percent of U.S. car loan applications include some type of material misrepresentation, executives at data analytics firm Point Predictive estimated based on reports from banks, finance companies and others. Lenders’ losses from deception may double this year to $6 billion from 2015, the firm forecast.

Obviously, the auto-loan bubble is nowhere near as large as the housing bubble ($1.2 trillion vs. $14 trillion).

Since 2009, the Fed has created a massive bubble in debt securities.

Here it is in all its glory. 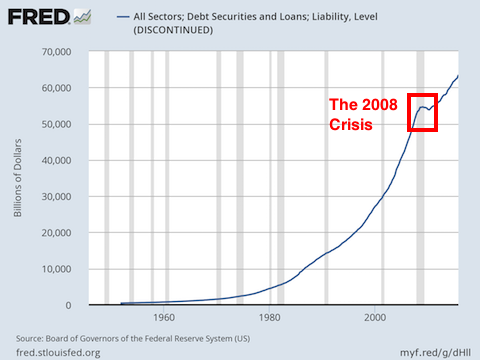 But both asset classes had fraud and subprime lending as an underpinning.

This is Subprime 2.0: the needle that will burst the debt bubble.