Are Stocks Heading For a 1929-Type Crash?

In the early 2000s, Alan Greenspan was worried about deflation. So he hired Ben Bernanke, the self-proclaimed expert on the Great Depression from Princeton. The idea was that with Bernanke as his right hand man, Greenspan could put off deflation from hitting the US. Indeed, one of Bernanke’s first speeches was titled “Deflation: Making Sure It Doesn’t Happen Here”

The US did briefly experience a bout of deflation from late 2007 to early 2009. To combat this, Fed Chairman Ben Bernanke unleashed an unprecedented amount of Fed money. Remember, Bernanke claims to be an expert on the Great Depression, and his entire focus was to insure that the US didn’t repeat the era of the ‘30s again.

Current Fed Chair Janet Yellen is cut of the same cloth as Bernanke. And her efforts (along with Bernanke’s) aided and abetted by the most fiscally irresponsible Congress in history, have recreated an environment almost identical to that of the 1920s.

In the 1920s, most of Europe was bankrupt due to after effects of WWI. Germany in particular was completely insolvent due to the war and due to the war reparations foisted upon it by the Treaty of Versailles. Remember, at this time Germany was the second largest economy in the world (the US was the largest, then Germany, then the UK).

Since the country was broke, incomes and taxes remained low, forcing Germany to run massive deficits. As its debt loads swelled, the county cut interest rates and began to print money, hoping to inflate away its debs.

When the country lurched towards default, US and other banks loaned it money, doing anything they could to keep the country from defaulting on its debt. As a result of this and the US’s relative economic strength compared to most of Europe, capital flew from Europe to the US.

This created a MASSIVE stock market bubble, arguably the second largest in history. From its bottom in 1921 to its peak in 1929, stocks rose over 400%. Things were so out of control that the Fed actually raised interest rates hoping to curb speculation.

The bubble burst as all bubbles do and stocks lost 90% of their value in a mere two years. 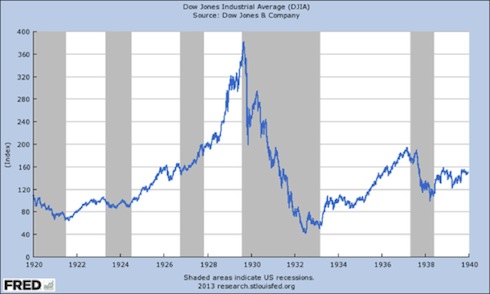 Today, the environment is almost identical but for different reasons. The ECB first cut interest rates to negative in June 2014. Since that time capital has fled Europe and moved into the US because 1) interest rates here are still positive, albeit marginally, and 2) the US continues to be perceived as a safe-haven due to its allegedly strong economy.

This process has accelerated in 2015.

Because the US is neutral, money has been flowing into the country by the billions. A lot of it is moving into luxury real estate (particularly in LA and York), but a substantial amount has moved into stocks as well as the US Dollar.

As a result of this, the US stock market is trading at 1929-bubblesque valuations, with a CAPE of 27.34 (the 1929 CAPE was only slightly higher at 30. And when that bubble burst, stocks lost over 90% of their value in the span of 24 months.

Another Crash is coming… and smart investors would do well to prepare now before it hits.

If you’ve yet to take action to prepare for the second round of the financial crisis, we offer a FREE investment report Financial Crisis “Round Two” Survival Guide that outlines easy, simple to follow strategies you can use to not only protect your portfolio from a market downturn, but actually produce profits.