Posted on May 18, 2015 by Phoenix Capital Research

Last week was options expiration week (equities and indexes). This is the week for market gaming as usually two things happen:

1)   The Fed juices the market to provide additional liquidity to Wall Street.

2)   Wall Street uses the additional liquidity to gyrate the markets to make sure as many options positions as possible expire worthless.

Today is Monday, which has become a rally day for stocks. However, there are several large negatives on the horizon.

The first concerns Greece. For three years now we’ve been told that Greece was “fixed.” It was not for the simple reason that you cannot fix a debt problem with more debt. There are only four ways to solve a debt problem:

Greece cannot engage in #4 because, as part of the Euro, it cannot print its own currency. This leaves one of the other three. Thus far, the IMF, ECB, and EU Government have managed to avoid facing the music largely because Greek politicians have been willing to sacrifice their economy in order to remain in power.

This appears now to be changing. The current Greek ministers seem far more willing to disagree with the Troika, to the point that there is talk of a Grexit (Greece leaving the Euro) on the other side of the aisle, particularly from Germany.

At the end of the day, it all boils down to money. Greece doesn’t have it. In fact, its latest payment to the IMF was made using funds from the IMF. The country is completely broke and has been raiding social security funds and other Government vehicles just to keep the lights on.

Greek banks have about 3 weeks worth of collateral on hand to remain solvent. And the country as a whole has 14 debt payments worth over €5.5 due within the next 10 weeks. This doesn’t sound like a lot… but for a country that was able to only raise €450 million by raiding its municipalities in April, it’s a gargantuan sum.

The Euro has found support at 1.05. The real issue will be just how much Euro strength ECB President Mario Draghi is willing to stomach before he smashes the currency down again. The lines to watch are below. 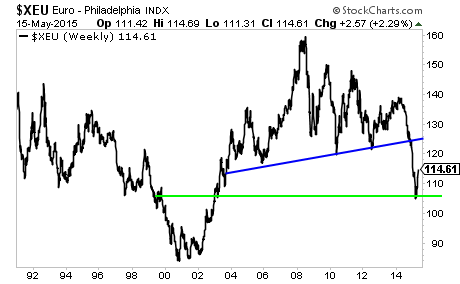 The Greek mess has lit a fire under Gold again, which appears to have bottomed in both the Euro (blue) and the Japanese Yen (red). The one exception is Gold priced in US Dollars mainly because the US Dollar has been so strong for much of the last 9 months. 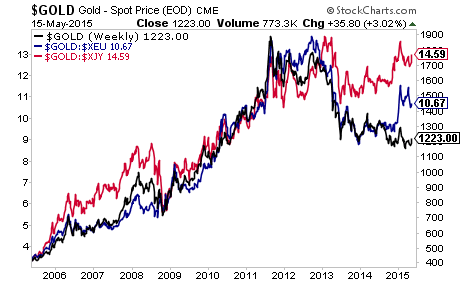 If you’re looking for actionable investment strategies to profit from market action, we strongly urge you to try out our Private Wealth Advisory investment newsletter.

2)   36 shorter weekly market updates (8-10 pages) issued the weeks between the longer monthly issues. In these updates we keep you abreast of developments in the markets and economy.

3)   Real-time trade alerts via email when it’s time to buy or sell a position.

4)   All EIGHT out of Special Investment Reports outlining extraordinary investment opportunities not available to the general public.

And you can try out Private Wealth Advisory for a full month for less than $1 (just 98 cents).