If you want to see in stark contrast why “top down” Government programs cannot fix the US economy take a look at the recent developments regarding school lunches.

In case you missed it, in 2012 the US public school system implemented a series of reforms to mandate what students should eat based on a healthier diet.

The program was spearheaded by First Lady Michelle Obama, who, despite not being a nutritionist or having any sort of medical degree, has decided she knows what’s best for children in terms of their diets.

As a result of the reforms, the cost of school lunches has risen and the quality has gone down. And students don’t like it. In fact, many of them have begun protesting the reforms saying that they’re hungry and the food portions are not enough.

However, the far more interesting development concerns students who have begun a black market of selling condiments to other students.

Children are creating their own black markets to trade and sell salt due to First Lady Michelle Obama’s school lunch rules.

During a hearing before the House Subcommittee on Early Childhood, Elementary, and Secondary Education, chaired by Rep. Todd Rokita (R., Ind.), a school administrator told Congress of the “unintended consequences” of the Healthy, Hunger-Free Kids Act.

“Perhaps the most colorful example in my district is that students have been caught bringing–and even selling–salt, pepper, and sugar in school to add taste to perceived bland and tasteless cafeteria food,” said John S. Payne, the president of Blackford County School Board of Trustees in Hartford City, Indiana.

Bear in mind, SAT verbal scores just hit their lowest levels since 1972. And this is after the test was dumbed down several times.

What’s my point with all of this?

That high school students, even those who are borderline-failing their SATs, have a better understanding of economics and job growth than Washington bureaucrats.

Welcome to the USA.

The reason the US rose to power was due to Democratic Capitalism of innovation and entrepreneurialism, NOT the Government running things. In the recent case of school lunches, the Government has gotten involved, prices have gone up, and students are unhappy. As a result, other students have stepped in, creating a sub-economy for lunches in the schools.

This has also been the case with Government run insurance, and Government run everything. Amtrak has never turned a profit and has been called a massive “failure” by its founder. In DC, they just spent over $200 MILLION to build a 2.2 mile trolley track… that’s a cost of $17,217 per FOOT of track.

And on and on. 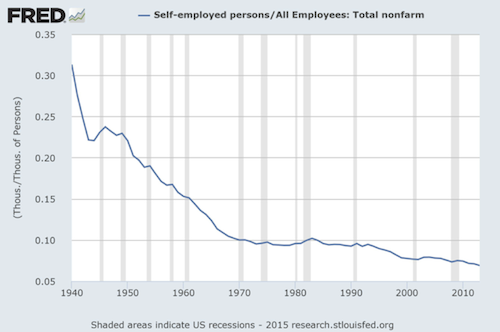