Central Banks Are Rapidly Losing Control of the System

Since 2008, the Keynesians running global Central Banks had always suggested that there was no problem too great for them to handle. They’d promised to do “whatever it takes,” to maintain the financial system and print the world back to growth.

Thus far, we’d seen some pretty aggressive moves. The most aggressive was committed by the Bank of Japan, which announced a single QE program equal to 24% of Japanese GDP in April 2013.

However, the SNB was the first Central Bank to actually reach the point at which it had to decide between printing a truly insane amount of money relative to GDP (50%+) or simply giving up.

It chose to give up.

The SNB was the first Central Bank to lose control… but now China has done the same!

Yesterday China devalued the Yuan. Previously the Yuan was pegged to the US Dollar, but with the US Dollar surging higher to a ten year high, China had a choice: print an insane amount of money to defend the Dollar peg or devalue the Yuan.

Like the Swiss National Bank before it, China chose to devalue. 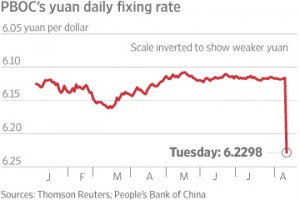 The significance of this is tremendous. China, the second largest economy in the world, has begun to lose control of the currency market.

With over $555 trillion derivatives trading based on interest rates (which trade relative to currencies), this could very well light the fuse on the next 2008-type meltdown.

Smart investors should take note of this now. It is a MAJOR red flag to be watched closely.

Private Wealth Advisory is a WEEKLY investment newsletter that can help you  profit from the markets: we just opened seven trades to profit from the above trends in the last two weeks. As we write this, ALL of them are soaring.

This brings us to a NINETEEN trade winning streak… and 25 of our last 26 trades have been winners!

Indeed… we’ve only closed ONE loser in the TWELVE MONTHS