The System is Officially Now in Worse Shape Than in 2008

For six years, the world has operated based on faith and hope that Central Banks somehow fixed the issues that caused the 2008 Crisis.

All of the arguments supporting this defied common sense. A 5th grader knows that you cannot solve a debt problem by issuing more debt. If the below chart was a problem BEFORE 2008… there is no way that things are better now. After all, we’ve just added another $10 trillion in debt to the US system. 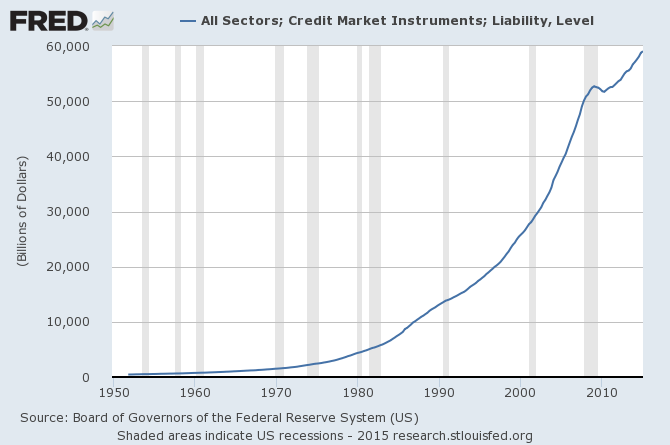 Similarly, anyone with a functioning brain could tell you that a bunch of academics with no real-world experience, none of whom have ever started a business or created a single job can’t “save” the economy. Indeed, few if any of the Fed Presidents have even run a bank before. And yet they’re in charge of the banking system.

However, there is an AWFUL lot of money at stake in maintaining the illusion of Central Banking omniscience. So the media and the banks and the politicians were happy to promote them. Indeed, one could very easily argue that nearly all of the wealth and power held by those at the top of the economy stem from this fiction.

So it’s little surprise that no one would admit the facts: that the Fed and other Central Banks not only don’t have a clue how to fix the problem, but that they actually have almost no incentive to do so.

So here are the facts:

1)   The REAL problem for the financial system is the bond bubble. In 2008 when the crisis hit it was $80 trillion. It has since grown to over $100 trillion.

2)   The derivatives market that uses this bond bubble as collateral is over $555 trillion in size.

3)   Many of the large multinational corporations, sovereign governments, and even municipalities have used derivatives to fake earnings and hide debt. NO ONE knows to what degree this has been the case, but given that 20% of corporate CFOs have admitted to faking earnings in the past, it’s likely a significant amount.

4)   Corporations today are more leveraged than they were in 2007. As Stanley Druckenmiller noted recently, in 2007 corporate bonds were $3.5 trillion… today they are $7 trillion: an amount equal to nearly 50% of US GDP.

6)   The Central Banks have no idea how to exit their strategies. Fed minutes released from 2009 show Janet Yellen was worried about how to exit when the Fed’s balance sheet was $1.3 trillion (back in 2009). Today it’s over $4.5 trillion.

We are heading for a crisis that will be exponentially worse than 2008. The global Central Banks have literally bet the financial system that their theories will work.  They haven’t. All they’ve done is set the stage for an even worse crisis in which entire countries will go bankrupt.

This process has already begun abroad.

In January 2015, the Swiss National Bank (SNB), backed into a corner by the ECB’s QE program, had a choice: print an obscene amount of money to defend the Franc’s peg or break the peg.

The SNB chose to break the peg. In a single day, the bank lost an amount of money equal to somewhere between 10% and 15% of Swiss GDP. More than that, it let the Franc appreciate… in a country in which 54% of the GDP is based on exports.

The next bank to lose its grip is the Central Bank of China.

With an economy in free-fall (GDP is growing by 3% at best), a dual house and stock bubbles bursting simultaneously, China’s regulators went on the offensive: freezing the markets, banning short-selling, arresting short-sellers, and pumping tens of billions of Dollars into the market per day.

Despite this, Chinese stocks continue to crater. And the economy hasn’t budged.

The fact of the matter is that despite public opinion, there are problems that are so big that the Central Banks cannot fix them. We’ve seen this in Switzerland and China. It will be spreading to other countries in the near future.

Private Wealth Advisory is a WEEKLY investment newsletter that can help you  profit from the markets: we just opened seven trades to profit from the above trends in the last two weeks. As we write this, ALL of them are soaring.

This brings us to a NINETEEN trade winning streak… and 25 of our last 26 trades have been winners!

Indeed… we’ve only closed ONE loser in the TWELVE MONTHS