The Road Map For How the Crash Will Play Out

Last year (2014) will likely go down in history as the “beginning of the end” for the current global Central Banking system.

What will follow will be a gradual unfolding of the next crisis and very likely the collapse of the Central Banking system as we know it.

However, this process will not be fast by any means.

Central Banks and the political elite will fight tooth and nail to maintain the status quo, even if this means breaking the law (freezing bank accounts or funds to stop withdrawals) or closing down the markets (the Dow was closed for four and a half months during World War 1).

There will be Crashes and sharp drops in asset prices (20%-30%) here and there. However, history has shown us that when a financial system goes down, the overall process takes take several years, if not longer.

The reasons for this are:

Regarding #1, investors have been conditioned for over 30 years to believe that there is no problem that Central Banks cannot fix.

By hook or by crook, Central Banks have managed to pull the financial system back from the brink for all of these. The end result has been that we are now sitting on the single largest asset bubble in history: the $100 trillion global bond bubble (well, really it’s $555 trillion if you include derivative exposure to bonds). We’ll delve into this more in a moment.

From the perspective of investor psychology, an entire generation of professional fund managers and investors have become pillars of the establishment without seeing Central banks fail at propping up the system (a fund manager who started working at age 22 in 1997 is currently 39… and the pros who actually lived through 1987 are now well into their 50’s if not older)

By way of example let us consider the details surrounding the Tech Bubble: the single largest stock market bubble of the last 100 years.

In this case, the Bubble pertained to just one asset class (stocks).  In fact, the bubble was relatively isolated to one specific sector, Tech Stocks.

And to top if off, it was absolutely obvious to anyone that it was a Bubble: note that the Cyclical Adjusted Price to Earnings or CAPE ratio for the Tech Bubble dwarfed all other bubbles dating back to 1890 (see the next page).

Stocks were so obviously overvalued that it was truly absurd.

And yet, despite the fact that this bubble was absolutely obvious and involved only one asset class, it still took investors well over six months after the initial 20% crash to realize that the top was in and the bubble had burst.

Moreover, during this six month period in which the single largest stock market bubble of all time burst, stocks did NOT go straight down. In fact, they were an absolute ROLLER COASTER with more than EIGHT price swings of 16% or greater. 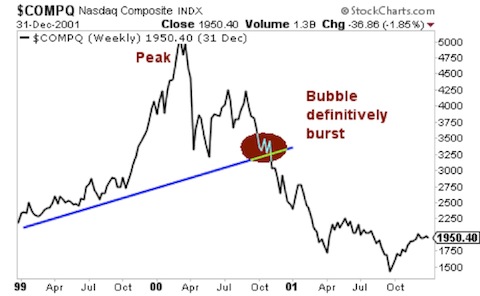 Let that sink in for a moment. Stocks were clearly in a bubble. Indeed, it was literally THE stock bubble of the last 100 years. And yet, when it burst, there was no clear consensus as to where the market was heading. 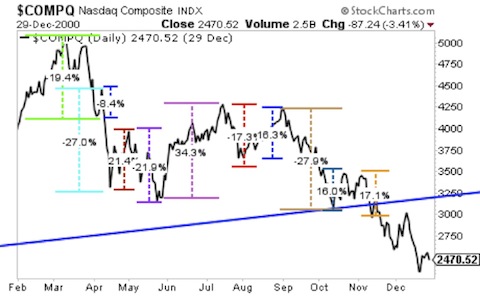 My point with all of this is that even when the bubble was both very specific AND obvious, the collapse was neither quick nor clean. There were several large 20%+ crashes, but overall, it was a roller coaster with jarring rallies that gradually wore its way down.

Indeed, it took stocks another TWO YEARS to bottom even AFTER the bubble had burst: 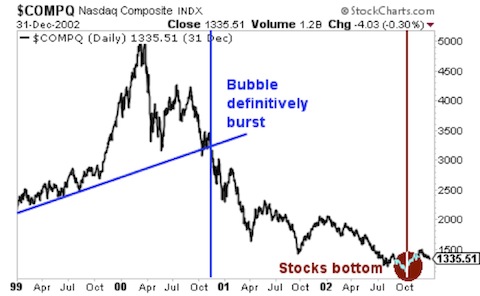 And when you extend the collapse from peak to bottom, the whole collapse took nearly three years. And this process was actually accelerated by the Fed actively cutting interest rates and flooding the financial system with liquidity.

To return to my initial point: the coming collapse in the financial markets will take its time. However, this process HAS started. And before it ends, we expect stocks to be 50% lower than they are now.