The most significant development in the markets today is S&P’s decision to revise its US outlook to negative. This single issue has resulted in stocks taking a nosedive and Gold exploding higher.

Regarding stocks, this has resulted in a clear double top forming. Even more worrisome is the fact the S&P 500 has broken through support at 1,300. 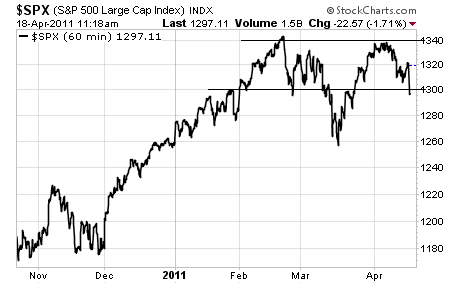 The next lines of support are 1,280 then 1,260.  I want to stress that the rising bearish wedge pattern we broke out of in late February forecast a significant correction with an ultimate target of 1,100. The only reason we didn’t go there in March was because of a concerted effort by the world’s central banks to intervene. However, if they loose control of the market now, we’ll be going there very shortly. 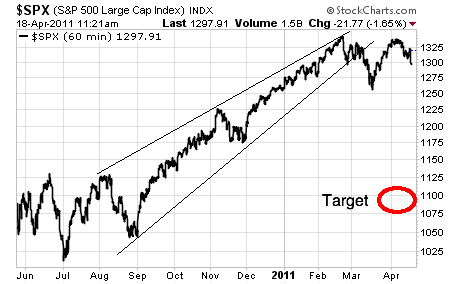 Interestingly, the S&P 500 announcement has resulted in the US Dollar rallying. Over the last 24 months, every time bad news was announced, the Dollar collapsed while stocks rallied on the idea that the Fed would be printing even more money to battle the economic downturn.

However, this time around, stocks are tanking and the US Dollar is rallying hard. The implications of this are vast. Is the Fed telling its buddies (Goldman etc) behind the scenes that they won’t be engaging in QE 3? Is the tide of easy money finally turning?

I doubt it. The Fed HAS to keep funneling the money into the insolvent big banks. Failing to do so will trigger a collapse in the interest rate-based derivatives market which currently stands at $180+ TRILLION in the US alone.

Regardless, in the meantime, the commodity space (with the exception of Gold) is getting slammed. The inflation trade had indeed gotten a little lopsided, but with inflation exploding around the world, I view this pullback as a buying opportunity, not the start of a bear market.

Remember, there is TRILLIONS in liquidity sloshing around the system right now. Inflation is already guaranteed. Sure we might have another debt Crisis, but there is absolutely no question that we’re going to be seeing massive debt defaults in the coming months and years. Currencies will be taking major hits when this occurs.

So with that in mind, I continue to maintain that we’ll be major inflation in the markets before the end of 2012. The weekly US Dollar chart has only one line of support left before the currency collapse hits. 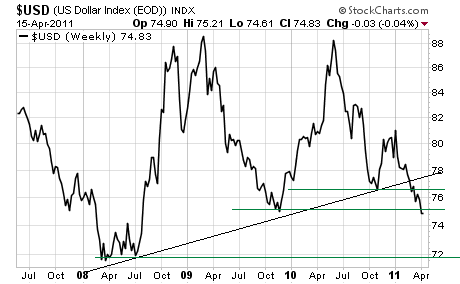 In this sense, the drop in commodities is a great opportunity to prepare for the coming Inflationary Storm. The Fed will pump more money into the system GUARANTEED.  They may have to do it behind the scenes, but they WILL

Have a look at what they’ve done this year already:

What you’re looking at it a $500 billion money pump (ON TOP of QE 2’s $100 billion per month) over the last four months. So all told we’re looking at nearly $1 TRILLION in new money hitting the financial system in the first quarter of 2011 ALONE.

We’ve already seen one of the three investments from the report get bought out for a 41% gain (in TWO MONTHS).  It’s only a matter of time before the other two explode higher either due to a buyout or inflation (one is already up 16% and the other isn’t far behind).

Again, there are only a few copies of the Inflationary Storm PT 2 report left. Once we sell out THAT’S IT, there will not be another copy released to the public and the doors are forever closed on this opportunity.