Why the Fed Is FREAKING OUT

I’ve shown the below chart before in other pieces. However, given its significance, it deserves regular review.

This is a chart of the adjusted US Monetary Base. It’s essentially a very simple means of charting how much money the US Federal Reserve is pumping into the system (on top of QE 2 which is providing another $100 billion in liquidity per month).

As you can see, starting in January 2011, the Fed left a paperweight on the “print” button. Since that time, it’s put $500 BILLION into the system. When you combine the $100 billion in liquidity provided by QE 2, we’re talking about $800-900 billion enter the financial system in 2011 alone.

There is only one period in which the Fed engaged in a similar amount of money pumps. And that was… during the depth of the 2008 Crisis from October- December 2008 (the two periods are comparable as the Fed didn’t have QE2 in 2008). 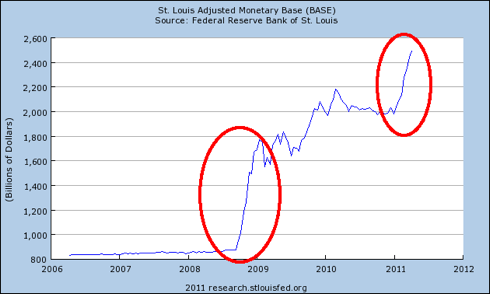 This of course leads one to ask, “what is the Fed combating now?” And it’s not just Japan (the adjusted monetary base went vertical back in January). So what is requiring $200 billion per month?

To provide some context to this, consider that during QE 1, the Fed was putting roughly $50 billion into the system. After QE 1 ended, the Fed’s monthly liquidity pumps fell to roughly $30 billion or less.

That’s when this happened: 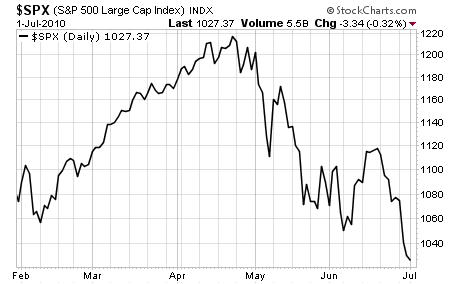 So it’s not surprising the Fed freaked out and started QE lite in August.

This kept things chugging along until QE 2 was announced in November at which point the Fed began putting $100 billion into the market. And the Fed is now pumping $200 BILLION into the system.

Small wonder then that the US Dollar is falling off a cliff. Indeed, the way things are going, the Fed will push into a full-scale inflationary collapse within three months.

We’ve already seen one of the three investments from the report get bought out for a 41% gain (in TWO MONTHS). It’s only a matter of time before the other two explode higher either due to a buyout or inflation (one is already up 16% and the other isn’t far behind).

Again, there are less only a few copies of the Inflationary Storm PT 2 report left. Once we sell out THAT’S IT, there will not be another copy released to the public and the doors are forever closed on this opportunity.