Graham’s note: The following is an excerpt from my most recent Private Wealth Advisory newsletter. In it I explain why the Fed will perform QE 3 and kill the US Dollar in the process. In this same issue, I alerted subscribers to three new inflation hedges that will produce out-sized gains from the Fed’s madness. These three come on the heels of the three investments detailed in my Inflationary Storm Pt 2 Report (one of which has already been bought out for a 41% gain). To learn more about Private Wealth Advisory click here.

The financial world is awash with a debate as to whether the Fed will engage in QE 3 in the future. To me this debate is pointless.

Indeed, the Fed HAS to engage in more QE 3 if it doesn’t want the entire market to collapse. Given the breakdown in Europe, the IMPLOSION in the Middle East, and the ongoing nuclear disaster in Japan, the removal of Fed liquidity would kick off a MASSIVE systemic Crisis.

Remember, we had a full-scale market breakdown when QE 1 ended and that was because of Greece: a country with a GDP of $329 billion. Removing liquidity from the markets when Japan, the fourth largest economy in the world (if you count Europe as one economy), the largest Oil exporting region in the world (the Middle East), and Spain and Portugal are all breaking down would lead to an absolute market DISASTER.

The Fed will not risk this. Besides it HAS to keep the liquidity going if it’s to continue supporting the TBTF banks in the US. Remember, 99% of what the Fed’s done in the last two years has been aimed at supporting the large, Too Big To Fail (TBTF) Wall Street banks. The reasons for this are:

2)   Fed leaders are all front-men for Wall Street

In order to understand these, you need to know that the REAL power of the Fed lies in its primary dealer network, NOT stooges like Ben Bernanke.

If you’re unfamiliar with the Primary Dealers, these are the 18 banks at the top of the US private banking system. They’re in charge of handling US Treasury Debt auctions and as such they have unprecedented access to US debt both in terms of pricing and monetary control.

The Primary Dealers are:

Of this group four banks in particular receive unprecedented favoritism of the US Federal Reserve. They are:

You’ll note that these are the firms deemed “Too Big To Fail.” The Fed not only insured that they didn’t go under during 2008, but in fact allowed these firms to INCREASE their control of the US financial system.

Then there’s Goldman Sachs which was made whole from all AIG liabilities, received $13 billion in direct funding from the Fed, and was supported while ALL of its investment bank competitors either went under or were consumed by other entities, granting Goldman a virtual monopoly over the investment banking business (the firms that were merged with larger firms all laid off large portions of their employees and closed down whole segments of their business).

My point with all of this is that we NEED to ignore what the Fed says and instead focus on what it does. And in the last two years, the Fed has done everything it can to support these four firms. Indeed QE’s 1, 2, and the coming 3 are nothing but an attempt to funnel TRILLIONS into these firms (and the other primary dealers).

The reasons the Fed is engaging in QE rather than simply dishing out the funds are:

1.     Political outrage would be EXTREME if the Fed just gave the money away

2.     The Fed needs to support those firms with the largest derivative exposure

The reason that the 2008 debacle happened was very simple. The derivatives market, the largest, most leveraged market in the world.

Today, the notional value of the derivatives sitting on US banks’s balance sheets is in the ballpark of $234 TRILLION. That ‘s 16 times US GDP and more than four times WORLD GDP.

Of this $234 trillion, 95% is controlled by just four banks.  Those four banks and their derivatives exposure (in $ TRILLIONS) are charted below: 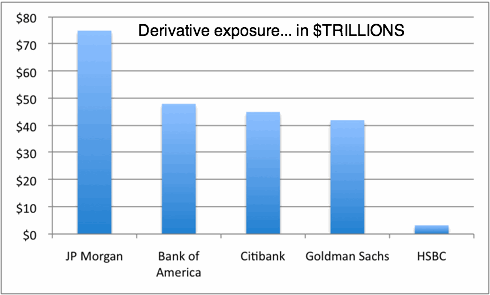 The above picture summates two things:

1)   Who REALLY controls the US financial system

The Fed HAS to continue pumping money into the system to support these firms’ gargantuan derivative exposure. Failing to do so would mean a disaster on the scale of four to five times that of 2008.

Remember 2008 was caused by the credit default swap market which was $50-60 trillion in size. The interest-rate derivate market is $200+ TRILLION in size.

So I am certain QE 3 will be coming. If it doesn’t come in June we’ll get hints of it until it’s finally announced. The Fed cannot and will not stop the money printing. Bernanke will be forced to resign long before he takes the paperweight off the print button. Small wonder then that the US Dollar is falling off a cliff. Indeed, the way things are going, the Fed will push into a full-scale inflationary collapse within three months.

We’ve already seen one of the three investments from the report get bought out for a 41% gain (in TWO MONTHS). It’s only a matter of time before the other two explode higher either due to a buyout or inflation (one is already up 16% and the other isn’t far behind).

Again, there are less only a few copies of the Inflationary Storm PT 2 report left. Once we sell out THAT’S IT, there will not be another copy released to the public and the doors are forever closed on this opportunity.