The US Dollar broke to a new low in the overnight futures session. It’s not surprising as China announced over the weekend that it expects to trim its US Dollar exposure by 2/3.

Yes, China has finally had enough of the US and its Federal Reserve. All of us were wondering at what point this would happen: China would only remain heavily invested in an asset that is rapidly losing value for so long.

Last week, several high-ranking Government officials in China announced that the country needs to diversify away from the Dollar… lowering the country’s exposure to Dollar related assets to $1 trillion (1/3 of its current levels).

Soon after this, the US Dollar definitively took out its 2009 low. 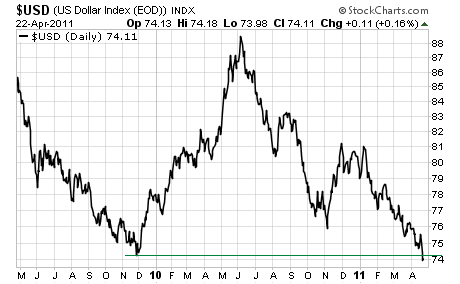 This only leaves the 2008 low for major support. 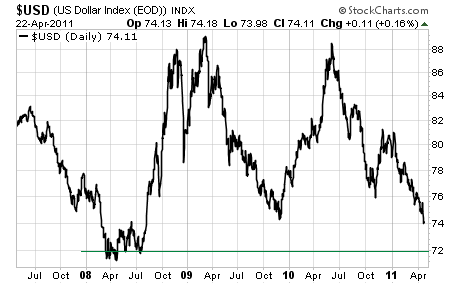 Gold and Silver have both exploded higher on the news.  Gold cleared $1,520 per ounce while Silver cleared $50 per ounce. 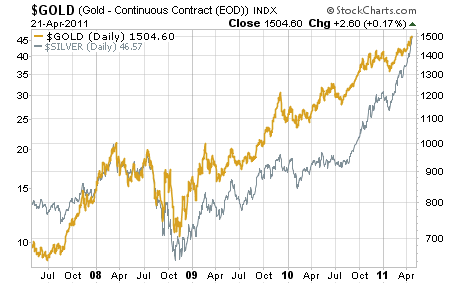 In simple terms, the world is now moving away from the US Dollar in a rapid pace. Russia and China are no longer using the US Dollar for trade between each other. Saudi Arabia is sending representatives to China and Russia to strengthen trade ties (which hints that oil may not be priced in Dollars in the coming years). And the BRICS (Brazil, Russia, India, China and now South Africa) recently staged a conference in southern China to discuss trading in their domestic currencies rather than the US Dollar.

If you have not prepared for mega-inflation in the financial system already, you cannot afford to wait any longer. The only thing holding the Dollar up was the belief that China and other foreign nations would continue to use Dollars: the Fed’s intervention was based on the idea that these countries would play along.

This is no longer the case. China has broadcast to the world that it’s had enough. It’s now only a matter of time before the US Dollar collapses. So if you’re not already moving into inflation hedges, you’re in major trouble.

It doesn’t have to be this way.

Indeed, since March 2010, I’ve been shifting subscribers of my Private Wealth Advisory into extraordinary inflation hedges: investments that will outperform even Gold and Silver in the coming inflationary disaster.

To find out about my inflation portfolio… including the nine extraordinary investments in it… all you need to do is take out a “trial” subscription to Private Wealth Advisory.

You’ll then immediately be given access to the Private Wealth Advisory archives where you can find out the names, symbols, and how to buy all nine of these incredible inflation hedges.

You then have 30 days to decide if Private Wealth Advisory is for you. If at any point during those 30 days you decide it’s not, just drop me an email and I’ll issue a full refund NO QUESTIONS ASKED.

To take out a “trial” subscription to Private Wealth Advisory…