Regarding Bin Laden, aside from the fact the guy was finally taken down (which he should have been ten years ago), the first thing we need to address is that it will spark retaliation of some kind. Whether or not the retaliation will be large in scope depends on whether Bin Laden was such a crucial player for Al Queda that his removal will leave them directionless. I cannot claim to know that.

Indeed, just about the only thing that COULD cause a major US Dollar rally would be a Crisis of some kind (financial, political, etc). The last two US Dollar rallies were induced by Crises (2008 and the Euro Crisis of 2009-2010). Unless we get another one soon (I don’t want this just pointing out the facts) the US Dollar is heading towards a serious collapse. 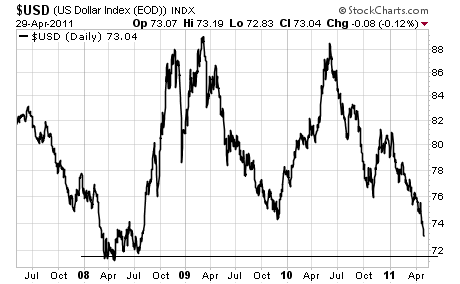 Indeed, it’s telling that ALL of the US Dollar’s gains on the Bin Laden news evaporated this morning in a matter of minutes. In the futures session we’re now into the sub-73 region: approaching the precipice.

Conversely, Silver and Gold both took a hit over the weekend. The reasons for this are not entirely clear, but given the speed of the move it must have been related to the margin hikes that occurred over the weekend.

For certain Silver needed to cool off. The precious metal had gone positively parabolic in the last month. Regardless of the fundamentals of the move (shortages, short-covering by large institutions, etc) a move like this is unsustainable and needs to cool and consolidate if an investment is to begin a new leg up.

However, what’s truly staggering about the weekend losses in Silver is that it had already retracted most of them by Monday AM. Indeed, if you were not up Sunday night looking at the futures, you would have thought Silver was just opening sharply lower (about 5%) completely unaware that the precious metal was down some 16% over the weekend.

So if you are not already preparing for mega-inflation, you need to get moving now. Because time is running out.

Indeed, this is why since March 2010, I’ve been shifting subscribers of my Private Wealth Advisory into extraordinary inflation hedges: investments that will outperform even Gold and Silver in the coming inflationary disaster.

How is this possible? Well, it’s really quite simple. EVERY SINGLE ONE of these investments is sitting atop some massively underpriced asset.

I’m talking about an asset that the market is currently pricing at 1/10th of its true value if not more.

And as commodity prices explode across the board, larger firms are going on buyout  binges snatching up smaller players to  boost their reserves.

A perfect example is TimberWest, one of the inflation hedges I recommended on February 23 2011.

TimberWest is the largest privately held  timber company in Western Canada. Timber has been the top performing inflation hedge over the last 50 years, and TimberWest’s holdings were undervalued by some 50%.

The set-up was quite simple. It was only a matter of time before a larger firm came knocking and bought out TimberWest at a hefty premium.

Indeed, we didn’t have to wait long… Less than two months after I recommended
it, TimberWest was bought out letting Private Wealth Advisory subscribers lock in a 42% gain.

Over the same time period, Gold rose 6% while Silver rose 19%.

Like I said, these investments WILL beat Gold and Silver.

And the set-up is the exact same for the four remaining Inflationary Storm investments in my Inflation Portfolio.

It’s only a matter of time before they’re all BOUGHT OUT at massive premiums, allowing Private Wealth Advisory subscribers to lock  in gains exceeding those produced by Silver and Gold over the same time period.

So if you’re looking to produce some enormous gains from inflation… and have the discipline to wait for the market to recognize the insane value of your investments, you still have FOUR inflation hedges to choose from in my Inflation Portfolio.

And I’m about to unveil three more this week in my next issue of Private Wealth Advisory. So  you’ll be able to get in on the groundfloor with them (several of the others are already up a good bit).