Graham Summers’ Free Weekly Market Forecast (What Is This? Edition)

The primary question now is whether last week’s rout in commodities was the start or something bigger or simply the bursting of mini-bubbles in Silver and Oil.

Don’t get me wrong, I believe Silver remains in a bull market long-term. However, any time an investment more than doubles in six months, there’s simply too much leveraged money behind it. This was the case with Silver, which went parabolic in the build up to May 2011. Consequently, we were set for a collapse of some kind.

The collapse took Silver to support at $35. We have since bounced hard. This situation needs to be monitored closely as it will indicate what’s coming for commodities in general. If Silver is able to continue upwards then last week’s action was just a shakeout of the weak hands in an overheated market.

However, if Silver rolls over again and falls below $35, we’re going to $40 in a hurry. This will drag down commodities in general. 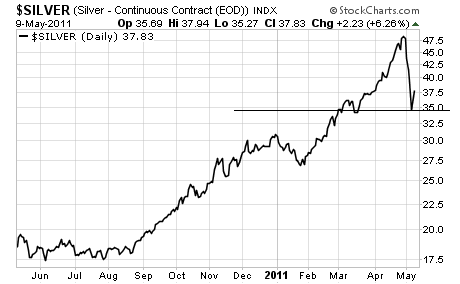 Another contributing factor to the sharp sell-off in commodities was the collapse in the Euro on announcements that Greece might leave the Euro-zone. As one would expect, Greece immediately refuted the claim. And thus began the “some official claimed that… another official refutes that,” nonsense.

The key item to note from this development is that insolvent Euro-zone countries will begin using the “we’re going to leave Europe” threat in order to get more favorable terms in their debt restructuring (none of them will pay the debt back).

From a technical standpoint, the Euro is now at support. If we break below here, it’s 140 then 137.5 relatively quickly. 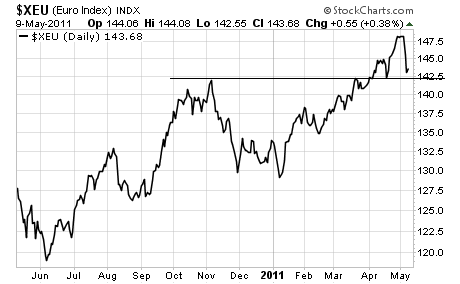 This move in the Euro pushed the US Dollar up which put more pressure on commodities and stocks. This is the consequence of a market dominated by quant funds and trading algorithms: one asset moves and all others follow it tick-for-tick.

Thus the primary issue this week is: are we heading for another round of deflation (all inflation assets collapse) or was this just a brief correction in an overheated market. Keep your eyes on Silver and the Euro, they’re the primary items that will signal what’s to come.

Regardless of what shenanigans come next, the outcome will ultimately be the same: HYPERINFLATION.

Consider that US is now running deficits and debt-to-GDP ratios that are comparable to Greece, which has already needed to bailouts and is now trying to restructure its debt. Greece can draw on the ECB for help with this. But who can the US  draw on for a bailout?

Make no mistake, the US Dollar is set to implode in the coming months. That’s why I’m already preparing subscribers of my Private Wealth Advisory newsletter with my How to Survive Hyperinflation Special Report.

I’ve already published Part 1 of this report which explains in painstaking detail just HOW and WHY the US is to a hyperinflationary collapse. And over the next three weeks, I’ll be releasing Parts 2-6 each of which will detail one EXTRAORDINARY inflation hedge that will outperform even Gold and Silver when hyperinflation takes hold.

To reserve your copies of these amazing reports, all you need to do is take out a “trial” subscription to my Private Wealth Advisory newsletter.

You’ll immediately be granted access to Part 1 of the How to Survive Hyperinflation report. And you’ll be notified via email when each of the next Five Reports is published including the names, symbols and how to buy each one of these extraordinary inflation hedges.

And ALL of these reports are yours to keep, even if you choose to cancel your subscription within the first 30 days and ask for a full refund.

To take out a “trial” subscription to Private Wealth Advisory…