For months now the commodities sector has been leading stocks. Of the commodities agricultural commodities were the market leaders: they began this rally back in June 2010, a month before Gold and two months Oil hit lift off: 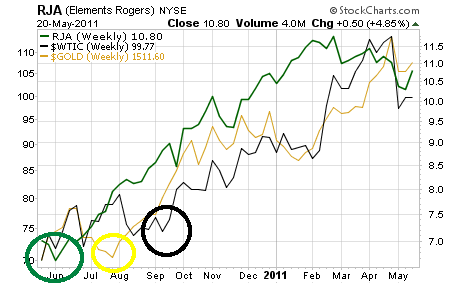 With that in mind, the first warning we got of trouble in the markets came from the agri space which began to roll over in February 2011. They fell hard, forming a domed top and are now bouncing off support to retest their descending trendline since the Feb 2011 top: 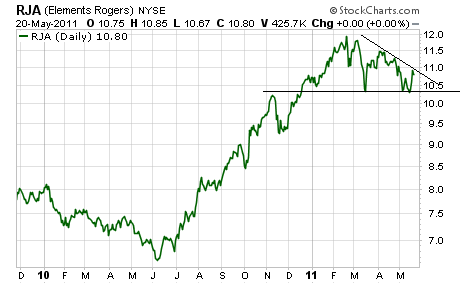 If we break the descending trendline, we’re likely to re-test the Feb 2011 highs. Alternatively, if we break support, we’re going to $9.50 if not $8.50 in short order.

IF this happens, then expect stocks to take a BIG hit. So far they’re held up relatively well although as we all know by now, stocks are ALWAYS the last to “get it.” So the fact that stocks have held up while commodities (especially the economically sensitive ones like copper and oil) have taken a dive could in fact be a BAD thing as it predicts some serious pain for stocks. 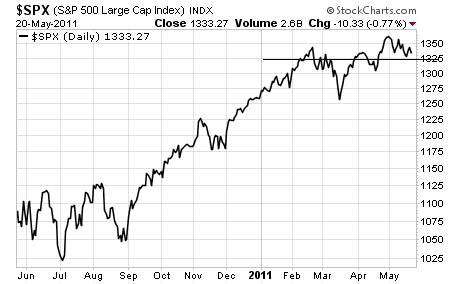 Indeed, the S&P 500 has formed a triangle pattern that predicts a potential breakdown to 1,260 if not lower. So be on the lookout for a potential SERIOUS correction coming shortly. 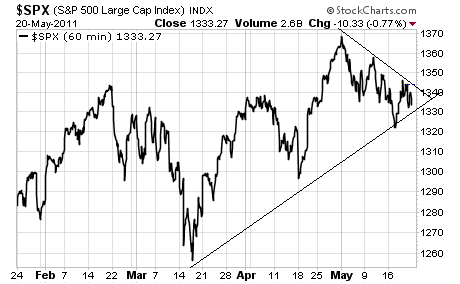 On that note, I’ve already got subscribers of my Private Wealth Advisory newsletter prepared for this with three quick trades to profit from a market meltdown. Already all three of them are up in the last few weeks and we’re just getting started.

To find out what they are… and get in on the gains….

Those who think stocks can’t collapse need to consider that the Fed actually WANTS this to happen: they need oil and other commodities to cool so the inflationary pressure drops. The Fed also need some kind of incentive to keep printing money. And a market collapse would serve as the perfect “SEE? We NEED to keep QE going to hold the system together” argument for later this year.

So expect stocks and the market to tank in the coming weeks. After that, QE 3 will be announced. And when that happens, inflation hedges will EXPLODE.

Which is why I’m ALSO preparing Private Wealth Advisory subscribers with a SIX-PART Special Report How to Survive Hyperinflation that details HOW and WHEN hyperinflation will hit the US as well as the names symbols and how to buy FIVE INCREDIBLE inflation hedges that will outperform even Gold and Silver when this happens.

I’m talking about inflation hedges that 99% of the investment world doesn’t know about: companies that own INCREDIBLE assets that the market is currently pricing at RIDICULOUS valuations.

The kind of assets larger firms will buy at a MASSIVE premium.

I’ve unveiling the first of these FIVE incredible inflation hedges tomorrow after the markets closes. After that the other four will be released over the next two weeks.

If you’d like to get in on these investments on the ground-floor the time to buy is NOW before inflation explodes in the US.