Why the “Is QE 3 Coming?” Debate is a Moot Point

The QE 3 debate has been raging ever since the Fed announced QE 2 in November 2010. However, this debate is moot. The reason is because the Fed HAS to perform QE 3 in some form or another.

After this came QE 1 from March 2009-April 2010. This entailed roughly $50-80 billion in money pumps per month hitting the market. Even after QE 1 ended the Fed continued supplying the juice to the tune of $30 billion or so per month (though most commentators completely missed this). 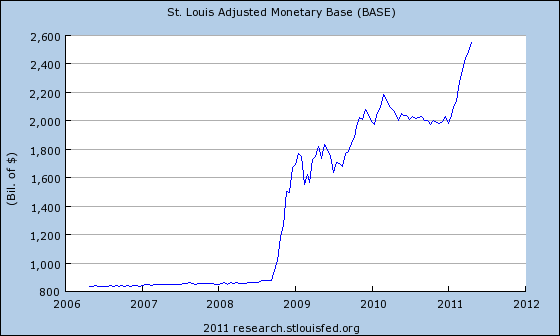 THIS is why I am certain QE 3 is coming. The Fed has done nothing but pumped money into the market since July 2007. Even during periods when it had no formal QE program in place it was STILL pumping money into the system.

However, the Fed has got itself in a bind. Having pumped so much money into the system, the Fed has created mini-bubbles in Silver and a few other commodities. Add to this the growing public outrage over the rising cost of living in the US and the Fed is finding itself the center of unwanted attention.

Consequently, Bernanke toned down his money printing talk and hinted at even worrying about inflation in the most recent Fed FOMC announcement. As a result of this, Silver and the other “bubbly” commodities have collapsed in a free-fall.

However, all of this is just idle posturing. Ben Bernanke has done only one thing since taking the helm of the Fed in 2006. And that’s monetary EASING.

During every part of his tenure as Fed Chairman, Bernanke has responded to all issues by loosening his monetary policy. Here’s just a brief recap of the moves he’s made since the Financial Crisis began:

I’m sure I left something out. But the above make it clear just how Ben Bernanke likes to tackle financial problems: printing money.

So make no mistake…BIG inflation is coming. The Fed knows only one thing: printing money. On that note, if you’ve yet to take steps to prepare your portfolio for the coming inflationary disaster, our FREE Special Report, The Inflationary Holocaust explains not only why inflation is here now, why the Fed is powerless to stop it, and three investments that absolutely EXPLODE as a result of this.

All in all its 14 pages contain a literal treasure trove of information on how to take steps to prepare AND profit from what’s to come. And it’s all 100% FREE.

To pick up your copy today, go to https://www.gainspainscapital.com and click on FREE REPORTS.

PS. We also offer a FREE Special Report specifying exactly how to prepare for the coming collapse in the US stock market (inflation will NOT be positive for stocks for much longer).

I call it The Financial Crisis “Round Two” Survival Kit. And its 17 pages contain a wealth of information about portfolio protection, which investments to own and how to take out Catastrophe Insurance on the stock market (this “insurance” paid out triple digit gains in the Autumn of 2008).

Again, this is all 100% FREE. To pick up your copy today, go to https://www.gainspainscapital.com and click on FREE REPORTS.