As I write this, Germany is rumored to have agreed to a second bailout for Greece. The Euro and stocks are rallying hard on the announcement. Silver and Treasuries are down, while Gold is roughly breakeven. 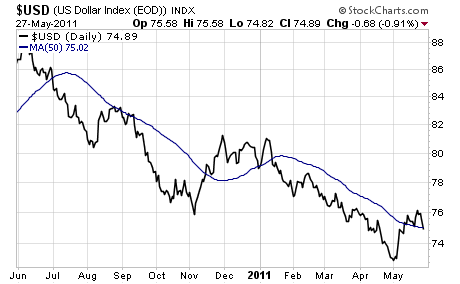 The technical pattern here is a falling wedge pattern. As the below chart shows we hit right up against upper descending trendline. We’re likely to test the lower trendline now which is around 72 or so: 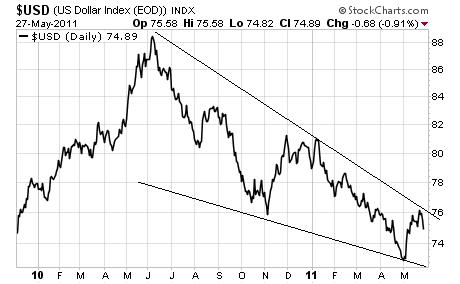 If we do this, it will mean a test of the all-time low originally formed in July 2008. If we take this line out, we’re into uncharted territory. 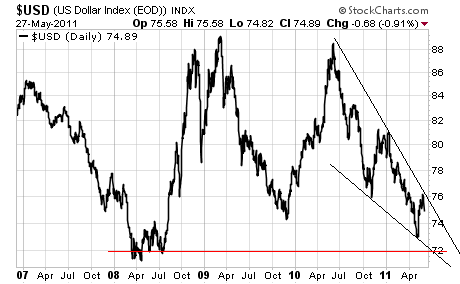 This situation needs to be watched closely as it could very well herald the next wave of inflation in the US. I’ve stated before I thought this latest US Dollar rally was a dead cat bounce. That’s now looking to be case.

On that note, I’m currently preparing subscribers of my Private Wealth Advisory newsletter for the next round of inflation with five extraordinary inflation hedges that will outperform even Gold and Silver as inflation hits the markets again.

I’m detailing them in a two part Special Report titled: Better Than Gold: The Five Best Inflation Hedges On the Planet.

Already one of them is already up 3%. However, this is NOTHING compared to the gains we’re going to be seeing.

My first inflation hedge is one of the greatest investment secrets on the planet. Over the last 10 years it’s increased its reserves 1,200%. Today it sits on over 12 million ounces of Gold.

However, despite this incredible track record and value, 99.9% of the investment world doesn’t EVEN KNOW THIS COMPANY EXISTS. Indeed, the last time a firm upgraded/ downgraded this company was OVER A YEAR AGO.

Literally NO ONE is talking about this company.

Because of this, the market has no idea about the true value of this company’s assets: today the company’s reserves are valued at only $600 PER OUNCE.

To give you a better idea of how absurd this is, consider that other, better-known companies with comparable reserves have market caps that are more than TWICE as big as this one.

I’m detailing this company and four others of similarly obscene value in two parts of my Better Than Gold: The Five Best Inflation Hedges On the Planet.

Part 1 of this report, which details this company and another one that’s even MORE attractive, is already online and available to download to all Private Wealth Advisory subscribers.

To get in on these investments AND receive the next three from Part 2 of my Better Than Gold: The Five Best Inflation Hedges On the Planet report, all you need to do is take out a “trial” subscription to Private Wealth Advisory.

You’ll then have 30 days to try out my insights and trading ideas. If, at any point during those 20 days, you decide Private Wealth Advisory is not for you, simply drop us a line and we’ll issue a full refund.

The insights and reports you gain during that time are yours to keep even if you choose to cancel.

To get started with your “trial” Private Wealth Advisory subscription…