Why the Fed Won’t Stop the Juice

It’s very strange to see commentators claiming that QE 3 will end and the Fed will no longer supply any juice to the system. After all, we have not had a period in which the Fed wasn’t pumping tens of billions into the markets since 2007.

Indeed, the only time the Fed wasn’t officially pumping its brains out was between the end of QE 1 (April 2010) and the announcement of QE lite (August 2010).

However, despite the formal declaration that QE 1 was over, the Fed DID continue to pump north of $10-20 billion into the markets every month, ALWAYS during options expiration week.

Like I said, there hasn’t been a period when the Fed wasn’t pumping in years. And let’s not forget that the Fed has ALSO been put an additional $600 billion into the markets since November (on top of QE 2).

That’s correct, in the last six months, the Fed has been pumping ANOTHER $100 billion per month into the system behind the scenes. 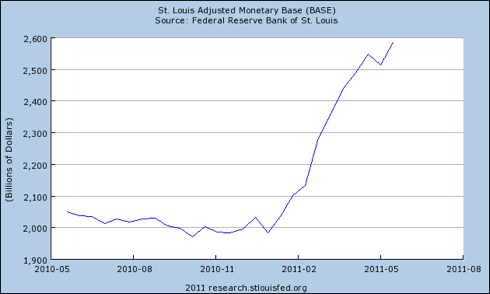 So at this point, between QE 2 and the Fed’s behind the scenes move, the markets are receiving nearly $200 billion per month in additional liquidity. The idea that the Fed will remove these props, when ALL the Fed’s done for four years is provide liquidity, is ridiculous.

So expect more QE or more liquidity pumps at any rate. The markets are already sensing this which is why commodities have put in a base and are now on the verge of beginning their next leg up: 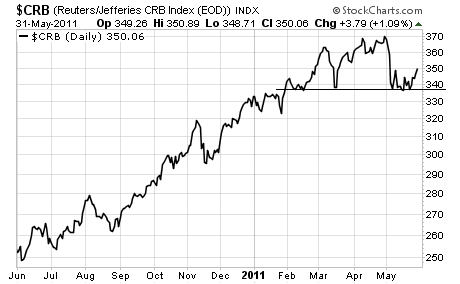 To reiterate the central points of this piece: the Fed has done nothing but pump the system since 2007. Every time the economy worsened or things got ugly the Fed added the juice. And it’s clear the US economy started to take another dive back in February 2011. So while QE 2 may officially end, the Fed will be pumping money behind the scenes… that is until it announces some new program, likely QE 3 or something just like it that uses a different term (the public is fed up with QE).

Keep your eyes on commodities. They’ll let you know what’s going on at the Fed.