Last month I warned that we could see another round of deflation before the Fed announces QE 3. At that time I wrote…

Indeed, if stocks were to drop off a cliff, they’d drag commodities down with them. This would take some of the inflationary heat off of consumers, which would allow the Fed to continue its BS “inflation is transitory” mantra and pave the way for QE 3.

Understand, I am absolutely certain we’ll see QE 3 in the future. But the Fed first needs justification for it. And a market collapse would be perfect.

This is exactly what has happened. In fact, it looks as though the Fed is intentionally letting the markets come undone in order to set the stage for more money printing down the road.

The issue now is how far the Fed will let things collapse. When QE 1 ended in April 2010, stocks dived 15% before the Fed stepped in and began hinting at more QE. By today’s numbers this would mean the S&P 500 falling to 1,160 or so.

However, given the extreme degree of danger in the world today (the European banking Crisis, the Middle East, China overheating and Japan’s nuclear disaster) there is plenty of room for surprises to the downside.

Indeed, we’ve already seen the commodity sector and emerging markets (particularly China) take a sizable hit. And Treasuries have begun to rally sharply too. All of these are typical warning signs that real danger is afoot for the stock market. 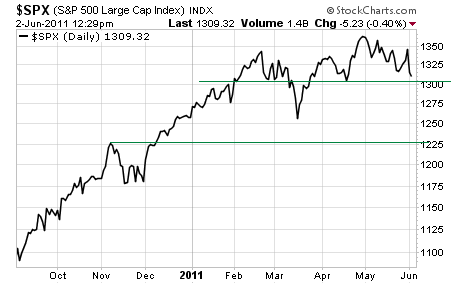 We’re also getting close to registering my proprietary Crash indicator. This signal registered before the 1987 Crash, Tech Collapse, and 2008 Disaster. It also caught the Euro Crisis of 2010.

And it’s getting close to registering a signal now.

Which is why I’m already preparing subscribers of my Private Wealth Advisory newsletter with five deflation trades designed to profit from a stock market debacle. While the market’s been a sea of red in the last two days, these positions have performed beautifully. One of them even rallied more than 6% yesterday!

Remember, in order for the Fed to announced QE 3 or some other money printing scheme, they need the financial system to cool down. So they have EVERY incentive to let stocks collapse right now. Fed members have even openly hinted at this possibility in the last week.

So the time to prepare for this is now. You simply cannot afford to be married to one outcome in the markets. Which is why I’ve got Private Wealth Advisory subscribers preparing for deflation in the short-term, with another round of inflation coming later this year after QE 3 is announced.

In other words, we’re covering all the bases… which is the whole purpose of Private Wealth Advisory: to make money in EVERY market.

So if you’re looking for actionable trades to profit from the coming market collapse… as well as future market moves, you NEED to check out Private Wealth Advisory today. Because the way things are going… if you put it off much longer, it might be too late.