Throughout most of 2009-early 2011, any and all bad news regarding the US economy was perceived as positive for stocks due to traders’ belief that a weak economy would mean more money printing from the US Federal Reserve.

That situation now appears to have changed. The last two months have seen big misses on virtually every economic data point: the PMI, ISM, Housing, etc. However, rather than rallying, stocks have dropped nearly 5%, taking out numerous lines of support. 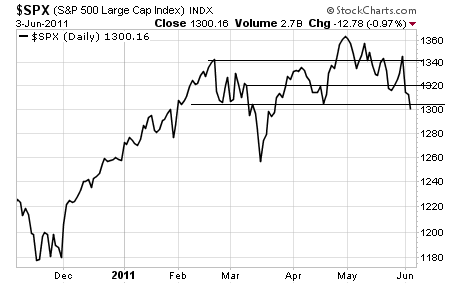 The commodity complex was way ahead of stocks on this one (agricultural commodities and copper topped out back in February), which was the first indication that the “bad news = more money printing= higher stock prices” group-think was in for a rude awakening.

However, despite the fact the Fed is pulling back on its liquidity schemes (at least temporarily), the US Dollar has continued to drop from February onwards. Indeed, aside from a brief dead cat bounce that occurred in May, the greenback has remained within the same downward channel that it’s obeyed since establishing a top back in May 2010. 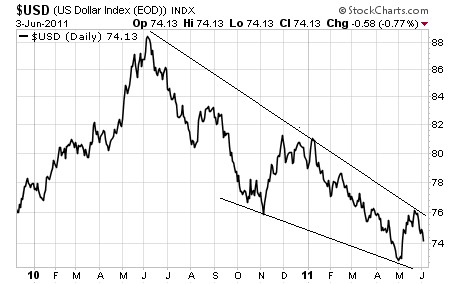 Thus we see that not only is the Fed no longer promising additional juice in the near future (sending stocks and commodities into corrective mode) but the US Dollar is failing to strengthen indicating that the “flight to quality trade” could potentially no longer be favoring Dollars.

It is, however, favoring Gold.

Gold took a hit along with the commodity complex. However, it has since come back with a vengeance and is now on the verge of challenging its all-time highs. 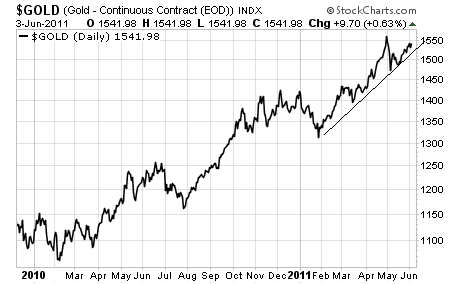 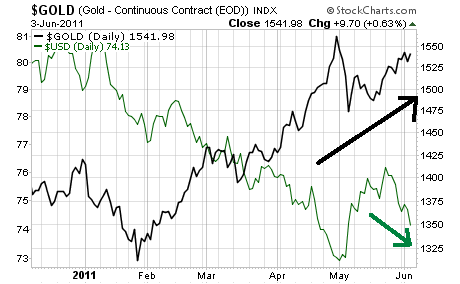 To conclude, Gold continues to impress me with its strength. And while it might take a hit if we get another round of full-scale deflation, the bull market in Gold continues to go strong. So I would look to increase exposure to the sector on pullbacks.

However, given the scale of the correction we’ve seen in commodities, as well as the horrendous economic data we’re seeing, I would look to lighten exposure to stocks, particularly more speculative positions, and getting defensive. This means focusing on high quality companies with minimal debt and substantial cash, particularly large-caps, while moving out of the small-cap space (the Russell 2000 right now is downright ugly).

If you’re looking for specific, actionable investment ideas with real-time buy and sell signals, I strongly suggest taking out a subscription to my Private Wealth Advisory newsletter.

In the last six months, I’ve alerted Private Wealth Advisory subscribers to a backdoor timber play on Japan’s restructuring, an unknown Gold miner that could easily double and still be cheap, and three short-term deflation trades, meant to profit from the market’s current weakness.

To find out more about Private Wealth Advisory …