The Charts You Need to See Today

First up is the Euro which has the makings of a triangle pattern. These patterns can break to either the upside or the downside… although it’s hard to find reasons the Euro might rally if Greece accepts the next round of austerity measures since most of its resilience has been based on hype and hope of this already. 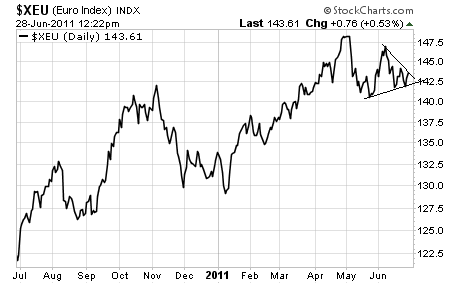 Indeed, we also see the makings of a Head and Shoulders pattern on the 60-minute chart for the Euro (I’ve also kept the triangle lines in place). 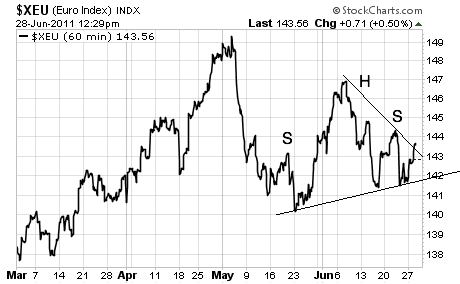 A very common bearish pattern, the H&S here forecasts a downward target of 135-136 or so. Of course neither the triangle nor H&S has been broken yet, so it’s too early to make a move here.

If the Euro does fall, expect the US Dollar to rally based on its index weighting to the former currency. Indeed, we see the potential for a serious US Dollar rally in the form of a bullish falling wedge pattern that may just have broken out to the upside: 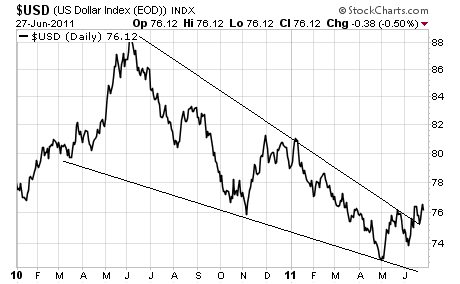 The target for this pattern would be north of 80… possibly even 84-86. However, the only thing that could trigger that kind of a run in the greenback would be a MAJOR Euro Crisis.

Since 2007, all major rallies in the US Dollar have been the result of stuff hitting the proverbial fan (the US has most certainly not implemented any fiscal moves that would strengthen our currency from a fundamental standpoint).

So, if and this is a BIG IF the US Dollar starts another bull run courtesy of a Euro collapse, we’ll likely see it peak out in the 84-86 range. 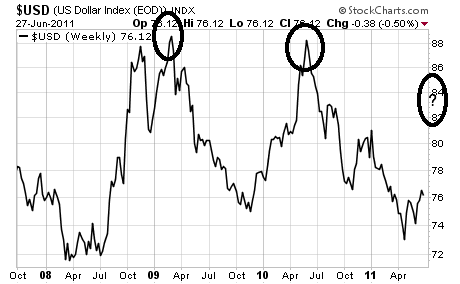 Should this happen, both stocks and commodities would take a sizable hit. However, of the lot Gold would come back the quickest. During the 2008 Crisis, Gold bottomed out in November 2008, a full four months before the US Dollar peaked. And the Euro Crisis of 2010 barely even dented Gold’s upward momentum: 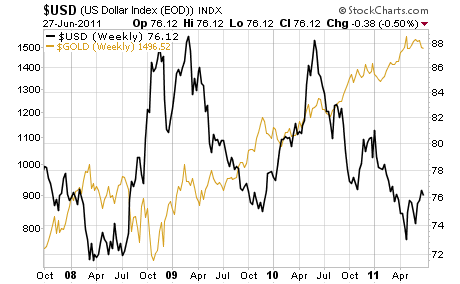 To conclude,  the charts today appear to be emphasizing the threat of deflation courtesy of a Euro collapse rather than inflation. And while it’s too early to invest based on these patterns (most of the patterns have yet to break-out), we’re getting close to finding the most prevalent trends for the coming months. We’ll have a much better idea once we see the results of Greece’s austerity vote.