With most of Wall Street absent in advance of the long weekend, those few traders on the street took advantage of the low volume to gun the market higher last week. This, combined with end of the Quarter performance gaming resulted in the market going positively vertical.

From a purely technical standpoint the S&P 500 has bounced hard off of it 200-DMA. We’ve now broken above the 50-DMA and are closing in on major resistance at 1,350: 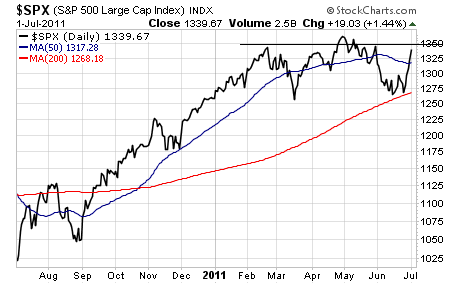 As I’ve stated numerous times before, stocks are always the last asset class to “get it.” So with that in mind, we need to consider what other asset classes are doing in order to determine if last week’s rally was based on anything real or simply Wall Street shenanigans. 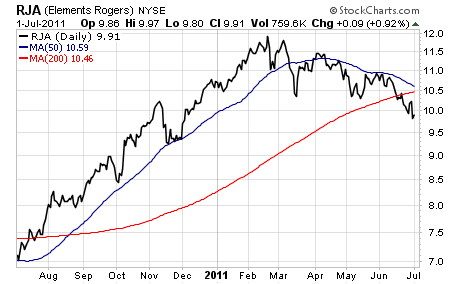 This has to be one of the ugliest charts out there. Having fallen below their 50-DMA, agricultural commodities have since been rejected by that line multiple times. And we are now on the verge of posting a death cross: when the 50-DMA breaks below the 200-DMA.

The picture is equally ugly for Oil and Silver: the other two big market leaders during the last year. Indeed, Gold is the standalone market leader that continues to hold up relatively well, primarily because it’s now the “go to” asset to protect against sovereign default risk: 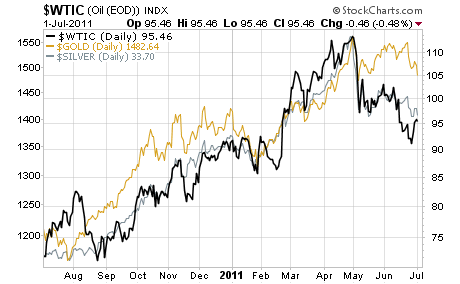 In light of this, it’s difficult to believe the stock market rally from last week as totally legitimate and not by end of the quarter performance gaming by hedge funds taking advantage of the light volume. This week’s action will go a long ways to explaining what’s to come in the weeks ahead.

In a market like this, the key is to stay nimble and find quick means of profiting from the volatility. Over the last year I’ve developed a system of trading that I believe to be the best such trading system IN THE WORLD.

That’s not a typo. Nor am I resorting to some marketing gimmick such as ignoring the losers. Rapid Fire Options Alert has closed 26 trade so far this year. Of these, 21 have been winners. And with an average gain of 20%… well, those gains can add up pretty quickly.

Best of all, this system is unbelievably easy to follow. We typically only trade once a week on Tuesday morning.

When it’s time to make a trade we send out a trade alert via both email and text, explaining exactly what option contract to buy and the price at which to buy it.

Then, when it’s time to sell (usually just 2-3 hours later) we send out another alert via text and email.

If this sounds like the kind of profit-producing trading system your portfolio could use, you can sign up for Rapid Fire Options Alert now and have your account in place in time for our next trade due out this week.

PS. A final note… we DO offer a 30-day trial refund period. So if you find that

Rapid Fire Options Alert isn’t for you, just drop us a line during the first 30-days and we’ll issue a full refund.

To get started with your Rapid Fire Options Alert subscription…