Given the ridiculous number of rumors (and ridiculousness of some of the rumors) related to the US and EU debt talks that are circling the financial community, I thought it best that we confront the realities these two economies face. Today we’re focusing on Europe.

Regarding Europe, we still don’t have any details regarding the Greek bailout, nor do we have any real sense of how the mega-bailout fund will really work in terms of solving any of the EU’s problems.

However, the fact remains that everything related to EU bailouts hinges on Germany. Germany is the most solvent member of the EU. And without its backing, NO EU bailout scheme will work in any way.

With that in mind, we need to consider that the majority of Germans now want out of the Euro. As I have noted in previous articles, politics is the name of the game in the EU, so the next round of German elections in September could dampen Germany’s interest in backstopping more bailouts (current Chancellor Angela Merkel’s party took a serious beating in the March elections already).

A second element that needs to be focused on is Germany’s economy. Any threat to the German economy could quickly hinder the debt talks/ bailouts in the EU for the following reason:

1)   Germany is the largest, strongest, most solvent, member of the EU, so if it’s in trouble, the less solvent members will be in major trouble.

2)   A weak German economy will fuel the political fires for those Germans who see little benefit in remaining in the EU (subsequently the heat will turn up on those politicians pushing for continued bailouts).

In simple terms, if the German economy breaks down, then the EU and the Euro are in big trouble. With that in mind, Germany has recently seen three economic releases that show the “recovery” is slowing (the IFO Business Climate, Manufacturing and Services, and the ZEW Economic Sentiment).

If any of the negative issues mentioned above become worse, the EU experiment would fast approach its end. This would result in the Euro taking a hit, which would push the US Dollar higher.

On that note, the Euro broke out of the triangle pattern I mentioned a few weeks ago to the downside. It’s now rallying to retest the lower trendline for this pattern (fitting the classic, break-down, test, then REAL move pattern I’ve been telling readers about for years). 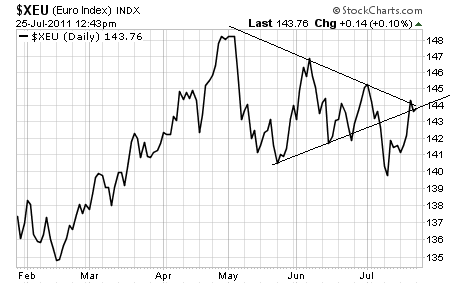 The ultimate downside target for the triangle patterns breakdown is 136 or so. So unless the Euro stays above 44, we’re going there relatively quickly. Given that Italy has just joined Austria in cancelling a bond auction, I’d say this downside target is on its way.

However, the bigger picture here is the 125-level which has been a line of massive importance for the Euro since its creation: 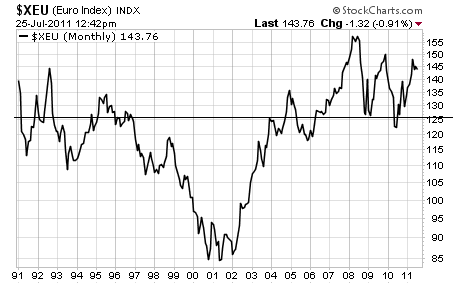 As the above monthly chart of the Euro reveals, 125 has served both as important resistance and important support over the last 20 years. The Euro just broke below this level during the 2010 Crisis. The next time it breaks below this line we’ll be in the midst of the final End Game for the Euro experiment.

On that note, if you’re looking for the means to produce quick profits based on market moves, you NEED to check out my Rapid Fire Options Alert newsletter.

Rapid Fire Options Alert uses a proprietary system of trading options that I’ve developed over my years as a financial analyst. The degree of accuracy is stunning (our success rate on trades is over 77%). And the gains are simply spectacular (we’re up over 230% for the year so far).

Most importantly, this system of trading couldn’t be simpler. We trade on Tuesday mornings. When it’s time to pull the trigger on a trade, we send out an email and text alert detailing which option contract to buy, what price to pay, and what stop loss to use.

Then when it’s time to take our profits (usually within four hours’ time), we send out a second alert telling our clients to sell and what price to sell at.

It’s that simple.  Provided you can trade regular puts and calls, ANYONE can use this system to increase their portfolio dramatically: again we’re up 230% for the year so far.