The market onslaught of the last week is now staging a snap-back rally. As I write this Sunday evening the S&P 500 has pushed to 1,143 in the futures markets. This was to be expected as we’d come up against the neckline for the Head and Shoulders pattern I noted the last two weeks: 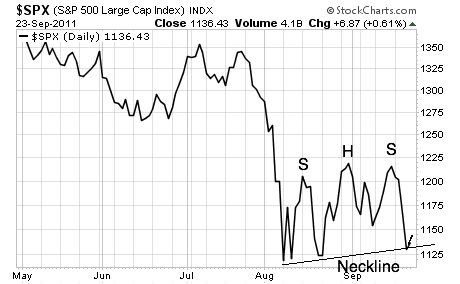 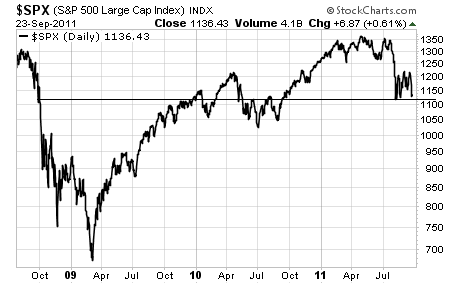 So this is THE line to watch in stocks. Once we take it out, we’re going to 1,000 in short order. By the look of things, it won’t be long.

To whit, my clients MADE money in 2008, outperforming every mutual fund on the planet as well as 99% of investment legends.

We also outperformed the market by 15% during the Euro Crisis of 2010. And in the last month and a half, while every one else lost their shirts, we’ve locked in 11 winners.

The minute you subscribe to Private Wealth Advisory, you’ll be given access to my Protect Your Family, Protect Your Savings, and Protect Your Portfolio reports telling you precisely which steps to take to prepare your loved ones and your personal finances for what’s coming.