The markets are snapping back sharply on short covering and end of the month performance gaming. Hedge funds have been getting destroyed over the last few months. So now, more than usual, there is incentive to push the market higher, mark up their positions, and end the quarter on a positive.

We’ve now filled the gap from last Thursday and our moving to challenge resistance at 1,200. 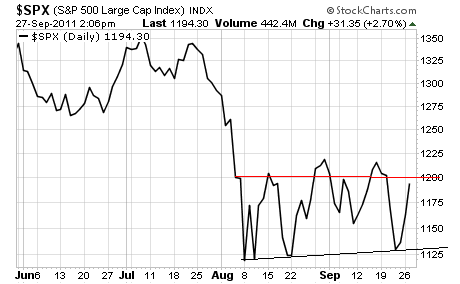 Do not let these sharp rallies fool you into thinking that the ongoing Crisis in the markets is over. We had very similar sharp rallies in 2008. In fact, during the Crash itself we had three sharp rallies of 11%, 17%, and 20% respectively. Every time the market rolled over hard soon afterwards.

My primary point is that just because stocks rally doesn’t mean things are better. The markets were sharply oversold and short interest was rising dramatically. In this environment it’s quite easy to kick off a sharp short-covering rally due to rumors and the usual end of month performance gaming.

Steve Liesman of CNBC claims a source informs him that we’re going to see a leveraged European Financial Stability Facility announced soon. Liesman’s source obviously doesn’t know what he or she is talking about OR the story was a plant (or both).

The reason I can say this with certainty is that German is fed up with bailouts as the below quotes from Finance Minister Wolfgang Schaeuble attest:

*SCHAEUBLE SAYS `WILL NOT SPEND OUR WAY’ OUT OF CRISIS

*SCHAEUBLE SAYS `IMMEDIATE FISCAL REFORMS ARE OF THE ESSENCE’

So those who are buying into Liesman’s BS are going to be in for a truly RUDE surprise in the coming days. We’ve seen how heavily manipulated rallies end several times in the last six weeks: BADLY.

To wit, my clients MADE money in 2008, outperforming every mutual fund on the planet as well as 99% of investment legends.

We also outperformed the market by 15% during the Euro Crisis of 2010. And in the last month and a half, while every one else lost their shirts, we’ve locked in 11winners.

I’m just putting the finishing touches on this report now. And it will be delivered “hot off the press” to your inbox the second it’s complete this evening.