After Europe’s Finished It’s Our Turn

I wanted to take a moment to address the Fed’s new program of buying the long-end of the Treasury curve and its implications.

First off, because of the August collapse in stocks, long-term Treasuries have already rallied quite sharply. Indeed, the 30-year Treasury just hit a new ALL TIME high the afternoon after the Fed announced its new program.

That’s correct, the 30-Year Treasury is now trading even HIGHER than it was at the absolute nadir of the 2008/2009 Crash: 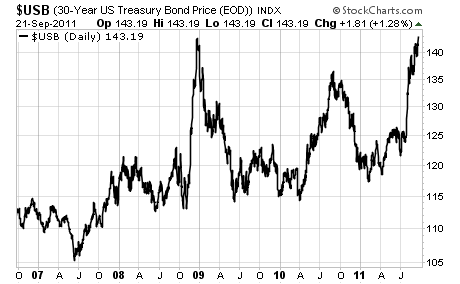 The fundamental picture here couldn’t be worse. The US is running a deficit equal to 10% of GDP. The US’s debt to GDP level is north of 100%. And the 30-Year Treasury is at an all-time high.

To be blunt: for the Fed to be buying Treasuries at this level is akin to buying Tech Stocks in 2000 or Housing stocks in 2007. Treasuries are in a bubble. And this bubble will end as all bubbles do: with a bang.

As noted in previous issues articles, interest rates are already at or near all time lows. So why would the Fed choose to buy longer-term Treasuries at all?

The answer lies in new US debt issuance. While everyone focuses on Europe’s mess, the US has once again raised its debt limit in September (the huge debt-ceiling debacle of August was just smoke and mirrors). With deficits and debt-to-GDP ratios on par with Greece, the US will be following Europe in the global debt implosion.

The Fed’s decision to buy $400 billion of longer-term US Treasuries in this environment is essentially the Fed announcing that it will be covering a significant portion of new debt issuance going forward as a means of putting off the inevitable US debt default. At most the Fed has bought 2-3 months of time for the US. I fully believe that before the end of this year, the bond market will shift its sights away from Europe to the US. At that time, the US debt bubble will burst resulting in systemic failure.

To wit, my clients MADE money in 2008, outperforming every mutual fund on the planet as well as 99% of investment legends.

We also outperformed the market by 15% during the Euro Crisis of 2010. And in the last month and a half, while every one else lost their shirts, we’ve locked in 11winners.

We just opened these trades yesterday. Already ALL of them are up.