While the European banking collapse is grabbing the most attention, the US banks, particularly the Too Big To Fails are showing serious sounds of distress as well.

As you’ll recall from previous  articles I’ve written, the TBTFs are the institutions most favored by the Federal Reserve and Treasury during the bailouts/ interventions of the last four years. With the greatest derivative exposure, the greatest leverage, and the greatest toxic debts on or off their balance sheets, these firms provide a glimpse into the US financial system’s inner workings.

With that in mind, I want to draw your attention to the fact that all of these firms’ share prices have recently dropped below their critical support lines established during the relief rally following the market bottom in March 2009. 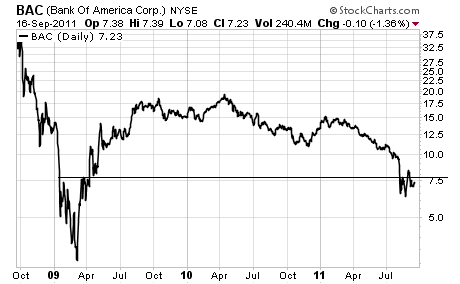 As you can see, the market drop of August 2011 has brought shares of BAC below the support level established by the first major rally coming off of the March 2009 lows (when the Fed first announced QE 1).

The same is true of Citigroup: 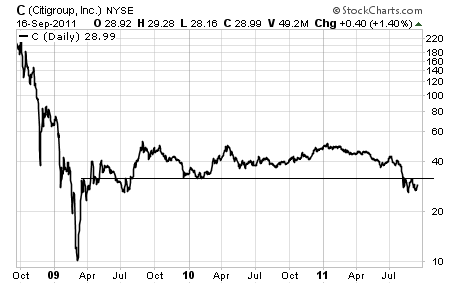 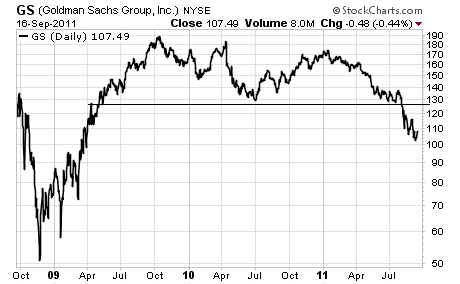 Indeed, the only TBTFs that haven’t fallen below their post bottom support lines are JP Morgan and Wells Fargo. But by the look of things, they’re both going to break down soon: 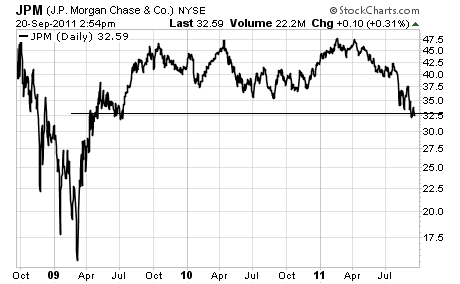 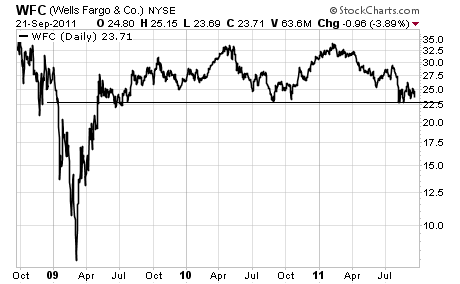 These charts tell us in no uncertain terms that the US financial system is once again under extreme stress. They tell us that the market is going down, down, DOWN over the coming months.  We’re going to be seeing major banks go under, market crashes, food shortages, government shutdowns, and SYSTEMIC FAILURE.

We also outperformed the market by 15% during the Euro Crisis of 2010. And in the last month and a half, while every one else lost their shirts, we’ve locked in 13 winners.

In fact, if you subscribe now, you’ll receive my latest issue of Private Wealth Advisory detailing four investments that are poised to produce enormous profits in the next month.

We just opened these trades late last week. Already all four of them are up. And we’re going to be seeing MAJOR gains from them in the coming weeks.