Things are getting truly desperate in Europe. I’d like to show just how bad they are by way of example: the Belgian bank Dexia, which is now in the process of being nationalized.

For starters, Dexia had 566 billion euros in debt and 19 billion euros in equity as of the end of 2010. Right off the bat, that’s a leverage ratio of 29 to 1. Lehman Brothers was leveraged at 30 to 1 when it collapsed.

Now consider that Belgium’s entire GDP is just 348 billion euros. Dexia has 566 billion euros in assets. Of this 352 billion are loans. Put another way, Dexia’s loan portfolio alone is larger than its home country’s entire economy.

AND THIS BANK PASSED THE STRESS TESTS.

Suffice to say, Europe’s banking system is in far FAR worse shape than anyone over there is admitting. The stress tests were complete and total fiction. And the market is starting to figure this out. 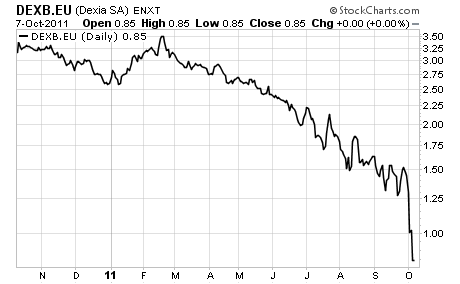 Small wonder then that had both the IMF and the Bank of England have recently warned that the world is facing a “financial meltdown” and “the worst financial crisis in history.”

Ben Bernanke issued his own statement of doom last week as well, stating that his precious recovery is “close to faltering.” For a guy who’s spent TRILLIONS trying to create a recovery to admit things aren’t working out ought to give you an idea of just how bad things will be getting in the near future.

Indeed, stocks were rejected last at a descending trendline from the July top. 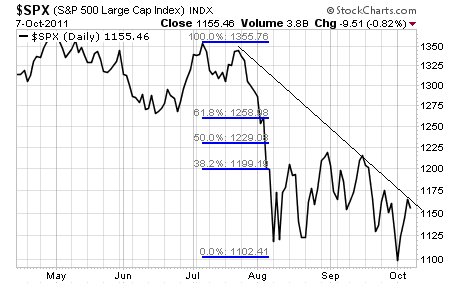 Here is the reality of the financial system today:

We also outperformed the market by 15% during the Euro Crisis of 2010. And in the last month and a half, while every one else lost their shirts, we’ve locked in 14 winners.

In fact, if you subscribe now, you’ll receive my latest issue of Private Wealth Advisory detailing 12 investments that are poised to produce enormous profits in the next month.