The Second Wave of the Greatest Depression

It is now clear the US economy has broken down in a BIG way. Indeed, no less than Ben “green shoots” Bernanke has stated that the recovery is “close to faltering.” This, coming from a cherrleader like Bernanke is essentially an admission from the powers that be that the US economy is a disaster.

Indeed, the recent manufacturing survey just posted its second consecutive month of contraction. As ZeroHedge noted, collapse in this economic metric has been greater than any two-month period in the last ten years, including 2008.

We also see that the ISM purchasers managers’ index, the Philly Fed index, payrolls, and the ECRI weekly leading index are all at or about to break into recessionary levels.

These are, of course, mainstream indicators of economic activity, which are heavily massaged. The economic realities in the US are far worse than even they proclaim as food stamp usage (43 million a record high), the labor participation rate:

… and U6 unemployment numbers reveal: 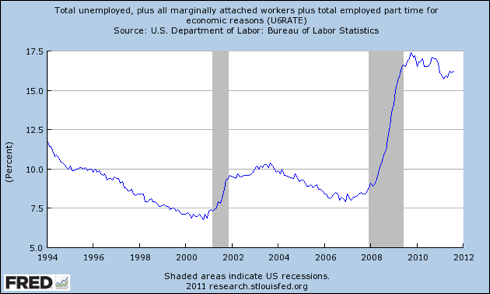 Suffice to say, the US economy is a disaster. And yet, analysts are expecting another earnings season of double-digit growth (the eighth quarter in a row). Somehow I think we’re in for some major surprises to the downside this earnings season.

And this is coming at a time when the markets are already shows signs of MAJOR duress.

Indeed, I truly cannot stress enough how dangerous things are right now. This is the most dangerous market I’ve ever seen. We’re seeing moves of 4-% in just HOURS, not even days.

And considering that leverage levels prior to this round of the Crisis were even higher than those from the Tech Bubble… combined with the $600+ TRILLION in derivatives floating around in the financial system… should give you a sense of how serious the market declines can and will be as this whole thing breaks apart.

The fact remains that we are going down, down, DOWN over the coming months.  We’re going to be seeing major banks go under, market crashes, food shortages, government shutdowns, and SYSTEMIC FAILURE.

If you have yet to prepare yourself for what’s coming, now is the time to do so. Whether it’s by moving to cash and bullion, opening some shorts, or simply getting out of the markets altogether, now is the time to be preparing for what’s coming (remember, stocks took six months to bottom after Lehman… and that was when the Fed still had some bullets left to combat the collapse).

If you’re looking for actionable investment ideas with specific “buy” and “sell” alerts, few if any folks on the planet can match my ability to make money during times of Crisis.

The below chart shows actual, verifiable recommendations I made in 2008. These are real “buy” or “sell” alerts that I sent to my clients during that time:

And finally, in the last two months, while the markets were a sea of red, Private Wealth Advisory subscribers have locked in fourteen (14) winning trades including gains of 6%, 7%, 9%, even 10% in just DAYS.

In fact, we haven’t closed a single LOSER since the end of July.

And we’re doing this with stocks and ETFs, NOT options futures or any other sophisticated financial instruments.

So if you’ve looking for someone to help you navigate this mess, I’m your guy. I’ve been helping investors (including executives at many Fortune 500 companies and strategists at numerous financial institutions and hedge funds) avoid collapses and profit from the market for years.

You’ll also join my private client list in receive my bi-weekly market commentaraies as well as my real time investment alerts, telling you exactly when to buy and sell an investment and what prices to pay.