Old-School Business Virtues From the Master of Nouvelle Cuisine

“Is this even food? How can food taste so good?”

My wife and I are sitting at Table #1 of Citronelle, the flagship restaurant of Master Chef and award-winning culinary genius, Michel Richard, at the Latham Hotel in Georgetown, Washington DC

We’re on our third course, Richard’s famous Tomato Tartare, a dish that transforms tomatoes, shallots, soy sauce and a handful of otherwise normal kitchen ingredients into a faux “beef patty” that honestly might be the single most delicious appetizer I’ve ever tasted.

It has all the hallmarks of a Michel Richard dish. The presentation was joyful, fun, and immaculate. Every bite was velvety, rich, succulent, sweet and tart at the same time. In fact, I was so overwhelmed by my first few bites that I actually caught myself saying the above quote to my wife.

And we were only three courses into a nine-course dinner.

I’ve eaten at some of the top restaurants in the world, having been to France multiple times, as well as Dubai, Singapore, Switzerland, and Peru. I can say with absolute conviction that I have never had a dining experience on par with Citronelle.

The Citronelle experience is like stepping into the mind of Richard himself.  Even without knowing anything about the Chef, the diner at Citronelle can tell that he is a man of enormous passion, precision, and focus. The amount of effort that goes into creating food this flawless in its execution, presentation, and taste is tremendous.

It is this combination of intense focus and fun, discipline and passion, that has allowed Richard to thrive in an industry that enjoys one of the highest rates of failure: nearly 60% of all restaurants close or change owners in the first three years of business.

Citronelle has been packed for 18 years straight. And Richard has run top-rated, successful restaurants spanning from LA to Tokyo to Santa Fe, New York, Baltimore, and Las Vegas for over 30 years.

Even more astounding, he made the transition from being a pastry chef (Julia Child once called him “the greatest puff pastry chef in the US”) to master chef: Richard has won several James Beard awards and cooks at a level that Wine Advocate describes as ”exceed[ing] any Michelin three-star chef in France.”

The move from pastry chef to chef is almost unheard of in the food world. And to go from being a top rated pastry chef to a MASTER chef, indeed, one of the best in the world, borders on the impossible.

I recently spent the better part of an afternoon discussing food, business, and how to translate passion into profits with Chef Richard at the Chef’s table located in Citronelle’s kitchen.

I started off by asking him about his transition from pastry chef to chef.

“When I was living in France in 1974, I was working for a famous pastry chef (the legendary Gaston LeNotre). One day he comes up to me and says, “Michel you wanna go to NEW YORK CITY?” I was excited. Unfortunately the restaurant didn’t succeed, but for me it was too early to go back to France. Then someone offered me a job in Santa Fe, New Mexico.”

“So I went to Santa Fe and I was working hard. But after a few months I was very unhappy. I was not in love with Santa Fe. I was a very ambitious young man and I was thinking about moving to San Francisco or LA. So I talked to the owner of the shop and told him I wanted to leave and he yelled, “OH NO! DON’T MOVE! DON’T MOVE! I want you to buy this place!””

“I took over and the place was PACKED. I already had a reputation and I worked both day and night. I used to sleep on the floor. I was very anxious to pay back my debt and to save some money.“

It was this enthusiasm that resulted in Richard’s meteoric rise in the US cooking scene. Well, that, and a work ethic that borders on the brutal: while Richard is given to dramatic statements, the above anecdote about sleeping on the floor is 100% true.

And the chef’s focus on perfection is extraordinary even 48 years into his career (throughout our conversation he stopped no less than 10 times to correct something in his staff’s performance or the restaurant as a whole that was not what he wanted). 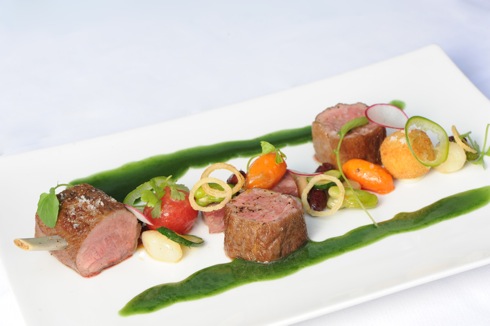 This combination of intense worth ethic, enthusiasm, and the highest devotion to quality translated into profits. Shortly after taking over the pastry shop Richard had not only paid off his debts but had pocketed enough money to open another pastry shop in LA, this time without any partner.

“My shop in LA was very successful. People stood in line outside every day. It was just a little pastry shop/ café but it was very busy. I was having a good time so I started traveling and enjoying myself.”

For modesty’s sake, Richard asked me not to state precisely how much money his shop was making, but I will say that it was over six figures … in annual revenue [remember this was the ‘70s]… from a single 1,800 square foot café/ pastry shop. He was only 26-27.

Having met hundreds, possibly even thousands, of businesspeople in my life, I can say that 90% of them would have sat on their laurels had they attained the level of success Richard experienced at the same age. Of the 10% who would have pushed for greater success, nearly all of them would have chosen to simply expand their current business.

“My old boss, Gaston Lenotre had a lot famous chef friends, guys like Paul Bocuse (a legend in French cuisine) who were masters of nouvelle cuisine. They used to come to LA or San Francisco and they would call me to make desserts for their special events. Because I was nice to them and trying to help them, they would invite me back to France. ‘Michel, why don’t you spend some time with us?’ they said.”

“So I went to France with Mr. Bocuse in Lyon. Jean-Louis Palladin (the famed chef of the Watergate Hotel) was another friend of mine. I fell in love with his style of modern cuisine. His food was impeccable. I tried to imitate him… to be better than him.”

Richard’s love for his profession is evident even at age 63. When he talks of restaurants and food his eyes gleam with joy.

“After staying with these great chefs, I came back to LA and I started to try and create my own dishes. Gradually I started serving some of my dishes in my pastry shop/ café for lunch and dinner. Some of my friends would say ‘Michel you are such a good chef, you should open a restaurant.’ But I didn’t feel ready. So it was ten years before I opened a restaurant.”

Humility is a theme that occurred throughout the course of my talk with Chef Richard. Despite being a legend in pastry circles at the age of 27, he dropped all pretence when he decided to become a chef. And though he’s primarily self-taught, and has become a master chef in his own right (one of the best), the respect he has for his mentors and profession even today is obvious.

Part of this humility came when he sought out investors for his first restaurant. Despite his fame as a pastry chef, when it came time to make his dream of opening a restaurant a reality, Richard found himself having to prove his talents yet again.

“It was tough for me to find money. I was a pastry chef. People would say, ‘A pastry chef wants to open a restaurant?!?! What does he know about food?’ But I would cook in my home and invite people over. They would be impressed, but it was not easy. I turned to a few of my friends. It took me ten years, but eventually I opened the restaurant.”

“The restaurant was a smash. It quickly became known as one of, if not the best French restaurant in California. I was working harder than ever. And I pushed to expand I started to open more restaurants: Santa Barbara, San Francisco, Baltimore, etc.”

“I was national now. But I was sad. The quality of the food went down. And I would be on a plane going to a restaurant feeling guilty for not being with my family or my other restaurants. I didn’t like it. Being involved with 10-15 restaurants doesn’t make me happy. So I started to downsize. I moved from LA to DC. And I focused on what makes me happy.”

In a culture such as today’s where money is often equated with happiness, Richard’s decision to focus on what really made him happy rather than his bank account stands in stark contrast to the image of the ever-ambitious businessman often promoted by the mainstream financial media. Today, it’s the norm for companies and businesspeople to focus on the bottom-line no mater what the cost to quality or personal fulfillment. 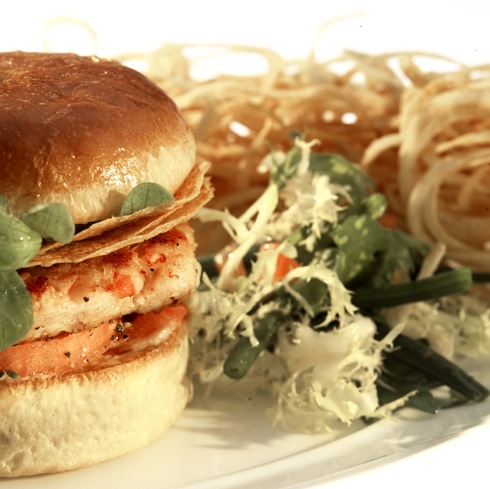 Another Richard creation: the lobster burger.

Interested in this admission of success as personal fulfillment, not merely financial success, I asked Richard what made him happy.

“What makes me happy is to have a restaurant with good food and happy guests. I LOVE this side! [points at kitchen] I was born there. I was born in the kitchen. I love it. It’s a playground, a canvas, a place I love to be. I feel so comfortable. When I put my chef coat on I feel so good. I’ve been wearing it for 50 years. But the minute I put it on I feel I have to respect it. I have to respect the tradition. “

“When people make a reservation I NEED to make sure they are happy, to take care of them all evening. I need to respect them. I want them to feel good.“

This is not just idle conversation. Richard’s love and respect for his profession are obvious in everything he does. Indeed, during the course of our conversation he stopped mid-sentence to personally wipe a table so that it was clean to his standards.

This is Michel Richard, master chef, and owner of the restaurant, personally wiping a table rather than getting someone else to do it. At age 63. With a smile on his face.

It was a striking moment, and one that any businessperson could learn from. Too often success is accompanied by arrogance and condescension for others. Not for Michel Richard. Despite his fame and an unending list of awards, he still strives for quality in everything he does.

Indeed, while our conversation primarily focused on the restaurant industry, the points and principles Chef Richard lives would serve as an example for any businessperson. His success is the product of hard work, respect for his customers, and a near superhuman focus on quality.

My advice to readers, particularly those involved in business: consider the points and principles Richard lives by in relation to your own work. Do you strive for quality in everything you do? Do you respect your customers or do you simply see them as a source of money for your business? How can you improve the quality of your work and client fulfillment?

On a more personal level, are you doing what really makes you fulfilled professionally? Do you work hard because you find meaning in your work or because you’re afraid of chastisement from a superior or others?

Finally, if you are ever looking for a dining experience like no other, you NEED to go to Citronelle in Georgetown Washington, DC. I must warn you in advance that it’s a high end restaurant. But you will remember the meal for the rest of your life.