So the financial world has collectively woken up and realized that the latest EU bailout scheme is fraught with problems and loose ends. Amongst the various problems are:

1)   The Greek private bondholders are furious that the ECB isn’t taking a haircut on its bonds too.

2)   German courts and voters aren’t too pleased with Merkel’s decision to go “all in” on the Euro experiment.

6)   The entire EU banking system remains far too leveraged (26 to 1) and needs another $1.5+ trillion in capital at the minimum.

The markets flew into this deal based on rumors and short-covering and are now waking up to the plain obvious facts that you cannot solve a debt problem with more debt. Also, it might be worth considering just where the EFSF bailout money will be coming from when various EU members can’t even stage successful bond auctions without the ECB stepping in.

Again, the primary issue for the EU is a lack of capital. There is TOO MUCH debt there. And issuing more debt, no matter how cheap, is not going to help. Especially when your strongest member (Germany) sports a REAL debt to GDP above 200% and hasn’t recapitalized its banks.

So the EU will be crumbling in the coming weeks. This was the final hurrah for the EU and the Euro in its current form. On that note, the Euro was rejected at resistance at 142 and has already taken out support at 140. 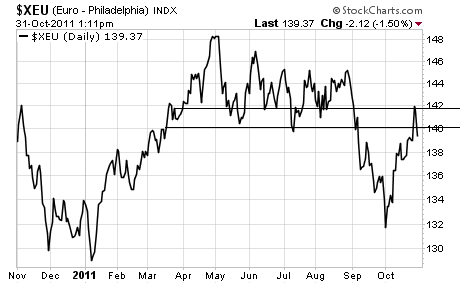 Once we take out 139, look for this breakdown to pick up steam (pulling stocks with it). 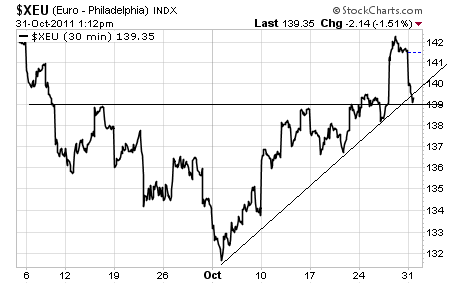 Indeed, the financial world is talking about how this was the biggest move in stocks since 1974. Unfortunately, few remember that after that move in 1974, the markets cratered.

Some thoughts on stocks… isn’t it a little strange that the market fell exactly 20% (the “official” bear market level) before kicking off the biggest ramp job in 30 years? How about the fact that this move came for no real reason other than rumors of another bailout (what are we on #3 for this?). 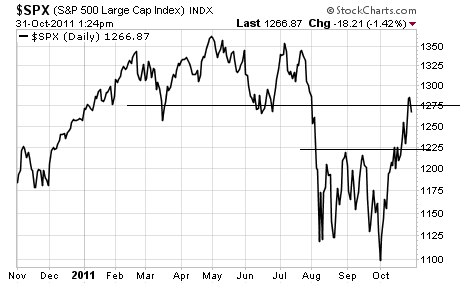 Can this move really be attributed to Euro choosing to let Greece default (which is what happened in reality)?

Regardless, stocks were deflected from resistance at 1,275 or so. They’re now on their way down again. The market is extremely overbought and susceptible to a fast violent move downwards.

Indeed, the credit markets remain jammed up and are anticipating even more haircuts from Greece. And the rest of the PIIGS will be following suit in the default game.

Ignore stocks, they’re ALWAYS the last to “get it.” The credit markets are jamming up just like they did in 2008. The banking system is flashing all the same signals as well.

So if you have not already taken steps to prepare for systemic failure, you NEED to do so NOW. We’re literally at most a few months, and very likely just a few weeks from Europe’s banks imploding.

I’ve already alerted Private Wealth Advisory to 12 CRISIS trades (three for Europe, nine for the US) that will all produce HUGE profits as this mess collapses.

You’ll also join my private client list in receive my bi-weekly market commentaries as well as my real time investment alerts, telling you exactly when to buy and sell an investment and what prices to pay (we’ve recently closed out 14 straight winners).

Indeed, we are raising the price of Private Wealth Advisory from $199 to $249 at the end of October. The reason is simple: both the performance of our picks (we’ve just closed out 14 straight winners) and the quality of our research (we predicted the 2008 bust, the Euro 2010 bust, the August 2011 collapse, and more) warrant a premium price.

So we’re raising the price of Private Wealth Advisory to $249 at the end of October.

To take out an annual subscription to Private Wealth Advisory now, lock in the soon to be old price of $249, and start taking steps to insure your loved ones and personal finances move through the coming storm safely…