This is No Cyclical Recession… It is a Secular DE-pression

Few if any commentators understand what is happening in the US today. The reason for this is that the vast majority of investment professionals believe that what they’ve experienced in their lifetimes is the norm.

Put another way, an entire generation of investment professionals has:

I firmly believe that what’s happening in the US today is not a cyclical recession, but a one in 100 year, secular economic shift.

See for yourself. Here’s duration of unemployment. Official recessions are marked with gray columns. While the chart only goes back to 1967 I want to note that we are in fact at an all-time high with your average unemployed person needing more than 20 weeks to find work (or simply falling off the statistics). 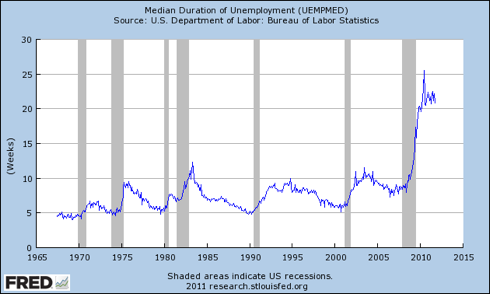 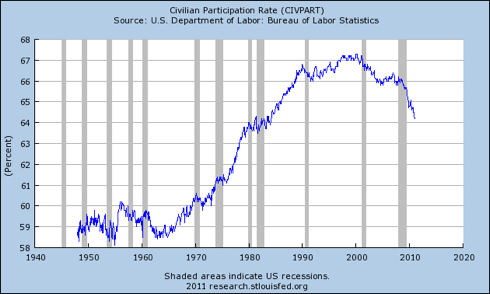 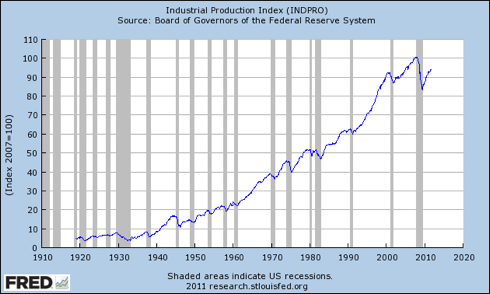 Again, what’s happening in the US is NOT a garden-variety cyclical recession. It is a STRUCTURAL SECULAR DEPRESSION. And the reason is that we are currently witnessing the collapse of the greatest debt bubble of all time.

Going into this recession, total US credit market debt was at its highest level of all time: over 350% of GDP. In comparison, during Roosevelt’s New Deal during the Great Depression we hit only of 300% total GDP.

Debt is absolutely endemic in our financial system. The average non-financial corporation in the US is sitting on a debt to equity ratio of 105%. Bank leverage, while relatively low compared to Europe (13 to 1 vs. 26 to 1), is still high enough that an 8% drop in asset prices wipes out ALL capital.

Folks, we’re not out of the woods yet… not by a long shot. The same problems plaguing Europe today are coming to the US’s shores. And when they do, everyone will realize what I’ve been saying since 2009: that 2008 was the warm up… the REAL Crisis is when the US defaults and we face systemic collapse.

This is coming. It’s no longer a matter of if but when. Which is why if you’ve not already taken steps for what’s coming, the time to do so is NOW before the real mess begins.

On that note, I’ve already alerted my Private Wealth Advisory clients to open 12 CRISIS trades in anticipation of the next leg down. Already several of them are up. And I fully expect we’ll see ALL of them in the double digits in the coming weeks.

You’ll also join my private client list in receive my bi-weekly market commentaries as well as my real time investment alerts, telling you exactly when to buy and sell an investment and what prices to pay (we’ve recently closed out 14 straight winners including gains of 7%, 8%, 9%, 9%, 10% and more… all in a matter of days (using stocks and ETFs).