There are two primary stories for the markets today. They are:

2)   The US stock market rally

Regarding #1, it is clear as day that the EU in its current form is finished. I’ve been saying this for months, but now even the mainstream media is picking up on rumblings that Germany wants to exit the Euro or at least restructure the entire EU.

DEATH OF THE EURO: SECRET PLOT TO WRECK THE CURRENCY

Ministers are understood to be deeply concerned that French President Nicolas Sarkozy and Germany’s Chancellor Angela Merkel are secretly plotting to build a new, slimmed down eurozone without Greece, Italy and other debt-ridden southern European nations.

Well-placed Brussels sources say Germany and France have already held private discussions on preparing for the disintegration of the eurozone.

German and French officials have discussed plans for a radical overhaul of the European Union that would involve setting up a more integrated and potentially smaller euro zone, EU sources say.

“France and Germany have had intense consultations on this issue over the last months, at all levels,” a senior EU official in Brussels told Reuters, speaking on condition of anonymity because of the sensitivity of the discussions.

“We need to move very cautiously, but the truth is that we need to establish exactly the list of those who don’t want to be part of the club and those who simply cannot be part,” the official said.

The reality of the Eurozone is as follows:

These are the facts. Everything else (political elections, austerity measures, etc) is just a distraction. The whole mess is just like 2008 when the plain simple truth was in front of all of us though 99% of the pundits focused on the various distractions (Wall Street CEOs saying the worst was over, Hank Paulson’s Bazooka, etc).

Europe can, at best, hope to replicate what happened to the US in 2008.

As for the other story in the markets today: the stock market rally which is based on fantasy and dreams. I’ve heard every excuse for this move ranging from “QE 3 is just around the corner” to “the leveraged EFSF will work,” but I’ve yet to hear anything that justifies this move as being something more than short covering and the usual bear market rally.

Let’s take a look over what’s happened since the market bottomed:

3)   The EFSF fails to raise even 3 billion Euros

And stocks have rallied 14% on these developments? 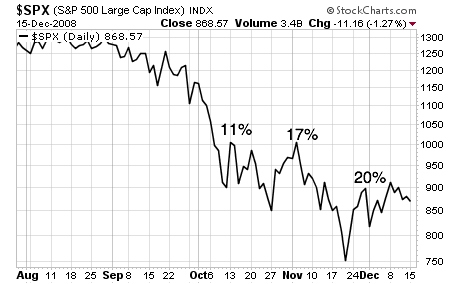 Having said all of that, stocks look to have formed a triangle pattern, which presents the possibility of a final thrust up, possibly to 1,300 on the S&P 500. 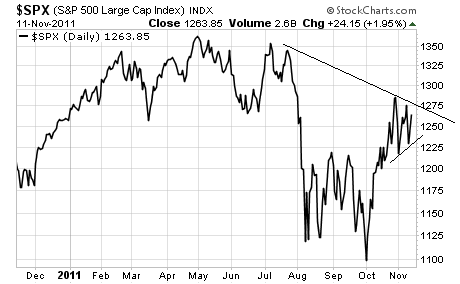 This move will likely be followed by a very sharp sell-off. With stocks tracking the Euro, it’s worth noting that a head and shoulders pattern is forming in the European currency. 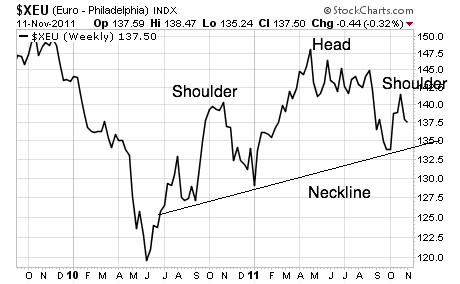 Folks, here’s the deal: the EU is out of options and out of time. Yes, we’ve seen some symbolic shifts in the political landscape, but the reality is:

2)   Germany WILL NOT monetize the PIIGS’ debt

3)   Greece will stage an even greater default, as will the other PIIGS nations

The powers that be know it. Why do you think China is importing a record amount of Gold… because they believe in the Euro? Weren’t they the ones who were supposed to save Europe?

The reality is that the powers that be (the Federal Reserve and ECB) are fast losing control of the system. Bernanke’s already admitted he hasn’t got a clue how to solve the financial system’s problems. The Bank of England says we’re facing the greatest financial crisis in history. Even the IMF has warned that we’re heading towards a global financial meltdown.

Folks… these organizations don’t issue warnings like this just for fun. They’re the ones who are SUPPOSED to SAVE the system. Do you think they’re issuing these warnings because everything is fine?

Again, the EU will be broken up in the coming weeks. When it is this market rally will collapse. And the ensuing carnage will make 2008 look like a joke.

So if you’ve not already taken steps for what’s coming, the time to do so is NOW before the real mess begins.

On that note, I’ve already alerted my Private Wealth Advisory clients to open 12 CRISIS trades in anticipation of the next leg down. Already several of them are up. And I fully expect we’ll see ALL of them in the double digits in the coming weeks.

You’ll also join my private client list in receive my bi-weekly market commentaries as well as my real time investment alerts, telling you exactly when to buy and sell an investment and what prices to pay (we’ve recently closed out 14 straight winners including gains of 7%, 8%, 9%, 9%, 10% and more… all in a matter of days (using stocks and ETFs).