The markets are rallying hard today for three reasons:

2)   The markets were oversold having fallen six straight days

These are the real reasons the market is exploding higher. Traders are simply using the (since refuted) IMF bailout of Italy rumor to gun the usual manic Monday rally and shred the shorts.

Technically, we were oversold and at support. So a bounce of some note here makes sense. However, a 3% rally? On rumors of an Italian bailout? Give me a break. 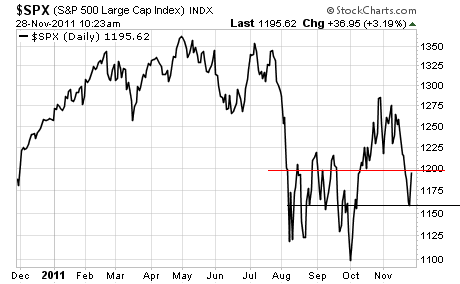 Regardless, this overnight move has already brought us up to resistance for the S&P 500. So we could easily see a reversal at any time (more on this in a moment).

The Euro also looks to be putting in a dead cat bounce: 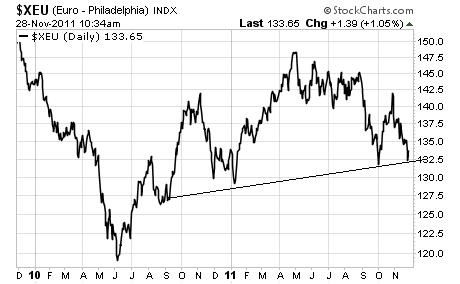 I’ve received a few emails recently about my pessimism regarding the markets, even when stocks rally. The reason I am so pessimistic is because the bond markets, credit markets and interbank liquidity indicate that the situation in Europe is now into “2008 mode”.

Indeed, Treasuries have already exceeded their 2008/2009 peak. Tell me, what do you make of a situation in which the bond markets (which are far larger than stocks) are acting as though we’re in a Crisis worse than 2008… which stocks are rallying? 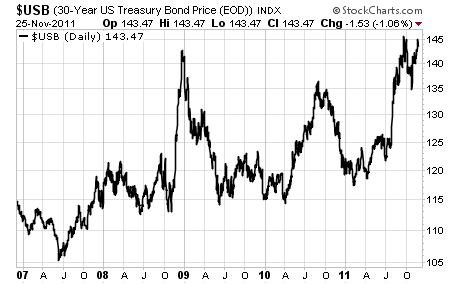 If you’ll recall from 2008, stocks rallied and held up much, much longer than the bond or credit markets. For that reason stocks are a terrible indicator of the real state of the financial system… which is why I remain so deeply concerned about the markets even though stocks have staged several very sharp rallies.

The reality for Europe is very, very grim. Among other items, we’ve recently seen:

3)   The EFSF plan scaled back with less leverage

4)   German companies warning their Greek subsidiaries to prepare for contracts that are based in Drachma, NOT Euros

Do you still think stocks “get” what’s happening today?

The reality is that we are already into a full-scale Crisis in Europe. Do you remember warnings of riots and systemic collapse in 2008? Well, we’re getting those this time around. Do you think these folks are issuing these warnings because we’re going to get through this mess easily?

If you’re an individual investor (not a day trader) looking for the means of profiting from all of this, then you NEED to check out my Private Wealth Advisory newsletter.

Private Wealth Advisory is a bi-weekly investment advisory that uses stocks and ETFs to profit from the dominant market trends.

Every two weeks I outline what’s REALLY going on behind the scenes in the markets, as well as which investments will profit best from these developments.

Case in point, Private Wealth Advisory subscribers caught the initial market Collapse in August. They’ve also profited beautifully from the ongoing turmoil in Europe as well as the volatility in the US Dollar.

In fact, we just closed out our 30th straight winner last week. And we haven’t closed a single loser since the END OF JULY.

But don’t worry that all the profits have already been made. We currently have several trades open that are primed to explode higher in the coming weeks. By subscribing today, you’ll immediately be given access to them.

You’ll also gain immediate access to my Protect Your Family, Protect Your Savings, and Protect Your Portfolio Special Reports outlining how to prepare these areas of your life for the coming Great Crisis.

1) how to prepare for bank holidays

2) which banks to avoid

3) how much bullion to own

4) how much cash is needed to get through systemic crises

5) how much food to stockpile, what kind to get, and where to get it