When confronted with excessive debt, you can either “take the hit” or you can try to inflate the debt away.

In 2008, the Central Banks, lead by the US Federal Reserve, decided not to “take the hit.” They’ve since spent trillions of Dollars propping up the financial system. By doing this, they’ve essentially attempted to fight a debt problem by issuing more debt.

The end result is similar to what happens when you try to cure a heroine addict by giving him more heroine: each new “hit” has less and less effect.

Case in point, consider the Central Banks’ coordinated intervention to lower the cost of borrowing Dollars three weeks ago. Remember, this was a coordinated effort, not the Federal Reserve or European Central Bank acting alone.

And yet, here we are, less than one month later, and European banks have wiped out MOST if not ALL of the gains the intervention produced. 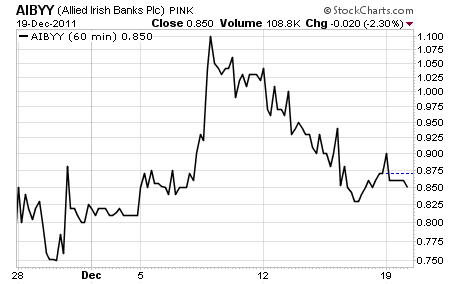 This is actually the best of the bunch I’m going to show you (by the way, this was a $4 stock at the beginning of the year). 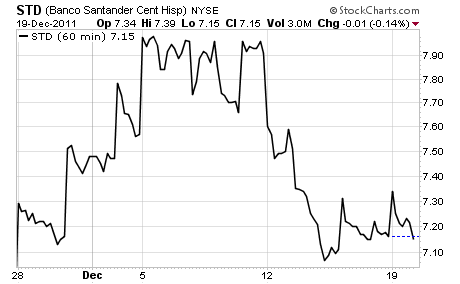 And lest you think it’s only the PIIGS banks that are in trouble, here’s French bank Credit Agricole: 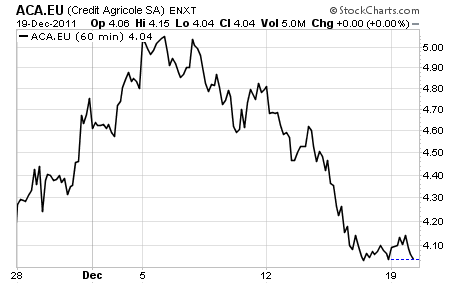 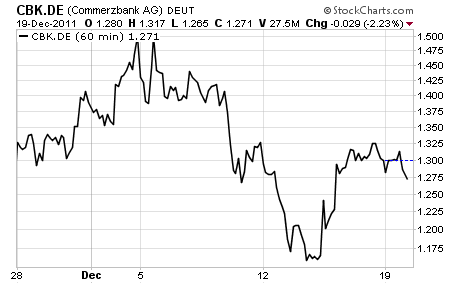 On that note, if you’re looking for investment ideas and risk strategies on how to profit from this, I strongly urge you to check out my Private Wealth Advisory newsletter.

Private Wealth Advisory is my bi-weekly investment advisory aimed at helping investors beat the market by anticipating major trends and avoiding the REAL risks to their portfolios.

Case in point, Private Wealth Advisory subscribers profited from the collapse in late July/ early August, having been warned weeks in advance that it was coming.

They’ve since locked in some 33 winning trades (and no losers)… at a time when 99% of investors (professional and otherwise) are getting whipsawed this way and that by the market’s volatility.

As a result of this, we’re crushing the market this year, which is why my clients (which include executives at Fortune 500 companies and some of the largest financial institutions in the world including UBS, Wells Fargo, Merrill Lynch, and others) are very, very happy.

But we’re not done by any stretch.

Indeed, we just opened seven new trades last week to profit from the next round of Deflation. All of these trades are positioned to explode higher in the coming weeks as the market comes unhinged.

To find out what they are… that the worry and uncertainty out of investing in today’s market… and start making serious returns from your investments (again, we’ve seen 33 STRAIGHT WINNERS in the second half of 2011)…