I first published this article a few weeks ago. Given the speed at which Europe is unravelling I think it’s worth reviewing as it summates the situation very clearly.

I continue to see articles in the media claiming that Europe’s problems are solved. Either the folks writing these articles can’t do simple math, or they don’t bother actually reading any of the political news coming out of Europe.

Here are three data points that GUARANTEE Europe will collapse at some point in the near future:

This is, of course, based on the assets the banks are reporting. According to independent sources, the leverage levels are in fact far, far greater than this (though 26 to 1 is already bordering on Lehman Brothers’ leverage levels).

Indeed, as far back as September 2011, PIMCO’s Co-CIO, Mohamed El-Erian (one of the most connected of the financial elite) noted that French Banks were running REAL leverage levels of almost 100-to-1.

El-Erian said French banks are a particular cause for concern, noting that “credit markets now put their risk of default at levels indicative of a BB rating, which is fundamentally inconsistent with sound banking operations.” He adds that bank equity now trades at a 50% discount to tangible book value on average, while the ratio of market capital to total assets has fallen to 1%-1.5%, compared with 6%-8% for “healthier banks.”

By the way, the EU’s banking system is $46 trillion in size.

Fact #2: One Quarter of the ECB’s balance sheet is PIIGS debt

As part of its moves to “save the system” the ECB has gorged on PIIGS debt. Today, one quarter of the ECB’s balance sheet is PIIGS debt. Care to take a guess at what these assets are valued at? I guarantee it’s nothing near their real market values.

The ECB managed to swap out its Greece debt into new debt that would not take a hit should Greece default. But it won’t be able to do this with the remainder of its PIIGS’ debts. Indeed, it’s not even going to try. Instead, the ECB plans on shifting any of the losses from these debts onto the individual EU national banks:

The mix of bond purchases and loans has exposed the ECB and the 17 national central banks that make up the euro to losses in the event of defaults or bank failures. Last month, the ECB was forced to swap its €50 billion Greek bond portfolio for new bonds to shield the banks from potential losses in the event of any forced write-­‐downs.

If banks that have borrowed from the ECB can’t pay the money back and the collateral they have posted falls in value or becomes worthless, the ECB would be on the hook for losses. Most of these losses would be spread across national central banks according to their size, meaning Germany’s Bundesbank would face the largest exposure.

So the ECB goes over Germany’s head to gorge on garbage debts from the PIIGS… and then decides that should these debts prove worthless, it’s Germany’s problem. What could possibly go wrong here?

Indeed, Germany has already put up a firewall that would allow it to walk on the Euro at any point. Obviously it doesn’t want to, but when the ECB tries to shift the losses from its PIIGS exposure (this will happen and they will be MASSIVE losses) onto Germany’s shoulders, Germany will have no choice.

Fact #3: Even after all of its interventions and purchases, the ECB is far too small to contain this mess (ditto for the Fed)

Have a look at the following chart and tell me that the ECB or Fed could contain this mess. 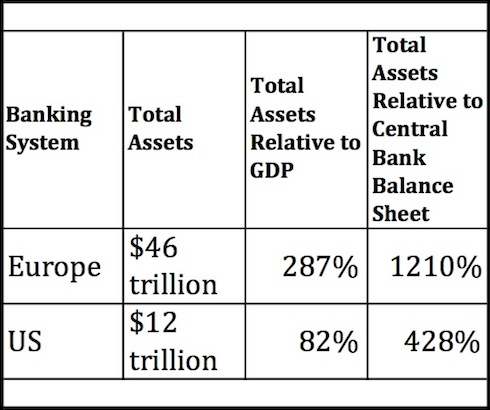 I know many of you are thinking “the ECB or Fed could just print money.” That answer is wrong. If the ECB chooses to do this, Germany will walk. End of story. They’ve already seen how rampant monetization works out (Weimar).

And if the Fed chooses to monetize everything to hold things up, then the US Dollar collapses, inflation erupts creating civil unrest, interest rates rise killing the banks, US corporations and the US economy… all during an election year.

Good luck with that.

Remember, the Fed’s QE 2 program which was a mere $600 billion (to bail out Europe the Fed would need at the minimum $2 trillion) pushed food prices to all time highs and kicked off riots and revolutions around the globe. Imagine what $2+ trillion would do.

Again, Europe cannot be saved. It’s too big and too leveraged. End of story. The collapse will come and when it does the Central Banks will not be able to contain it.

If you’re not already taking steps to prepare for the coming collapse, you need to do so now.

With that in mind, I’m already positioning subscribers of Private Wealth Advisory for the upcoming collapse. Already we’ve seen gains of 6%, 9%, 10%, even 12% in less than two weeks by placing well-targeted shorts on a number of European financials.

So if you’re looking for the means of profiting from what’s coming, I highly suggest you consider a subscription to Private Wealth Advisory. We’ve locked in 46 straight winning trades since late July (thanks to the timing of our trades), and haven’t closed a single losing trade since that time.

Because of the level of my analysis as well as my track record, my work has been featured in Fox Business, CNN Money, Crain’s New York Business, Rollingstone Magazine, and more. Which is why we’re raising the price of Private Wealth Advisory from $249 to $399 at the end of April. The reason? This is a premium quality newsletter than commands a premium price.