As expected Francois Hollande won the first round of the French elections. He and Nicolas Sarkozy will run against each other in the second round, which will occur on May 6th.

The Euro isn’t taking this news well. As I write this Sunday night the Euro currency futures have gapped down. I’ve added this move to the chart below. 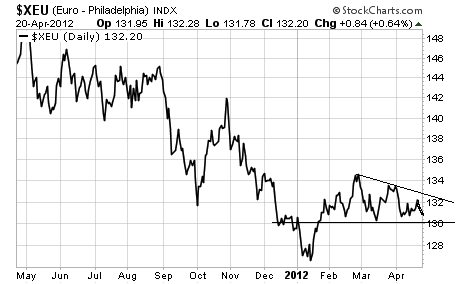 130 remains the line in the sand for the Euro. If we take it out with conviction then we’re in BIG trouble. 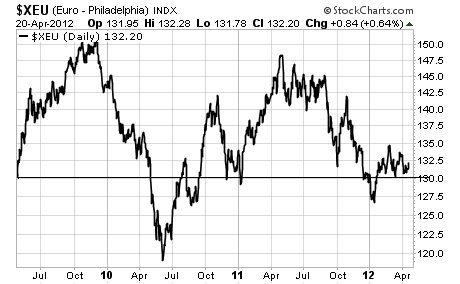 I believe we’re at most a month or so away from this. Spain has now stepped center stage in the Euro Crisis. And the Spanish Ibex has just taken out its 15-year trendline: 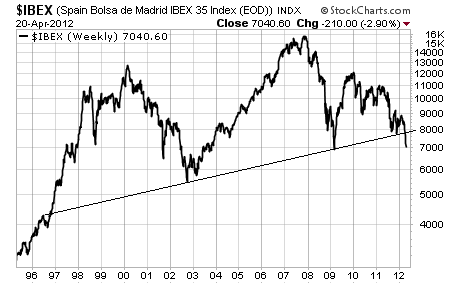 This spells MAJOR trouble for Spain and the rest of the EU. Unlike Greece, (which has its own elections, which could go very wrong for the EU, on May 6th by the way), Spain is too big to bail out.  Indeed, the Spanish banking system is a toxic sewer of bad mortgage debt: over half of all mortgages were generated and owned by the unregulated cajas. If you’re unfamiliar with the caja banking system, let me give you a little background…

Until recently, the caja banking system was virtually unregulated. Yes, you read that correctly, until about 2010-2011 there were next no regulations for these banks (which account for 50% of all Spanish deposits). They didn’t have to reveal their loan to value ratios, the quality of collateral they took for making loans… or anything for that matter.

As one would expect, the cajas have been collapsing like dominos in the last few years. Spain’s been trying to prop them up by merging them with larger (likely equally insolvent) banks with no success (the merged banks have all collapsed to new lows in the last month).

Things have gotten so bad that Spanish citizens are pulling their money out of Spain en masse: €65 billion left the Spanish banking system in March 2011 alone. And all of this is happening at a time in which relations are breaking down between Germany and the ECB as well as between Germany and France.

In other words, the EU collapse is about to enter its next round. Remember, all collapses follow the same pattern:

The most money is made during #3. Right now we’ve finished #1 and are now ending #2.  When #3 hits (likely after the French election on May 6th), is when the REAL Fireworks will begin (assuming Spain’s collapse allows things to hold up that long).

So if you’re not already taking steps to prepare for the coming collapse, you need to do so now.

With that in mind, I’m already positioning subscribers of Private Wealth Advisory for the upcoming EU collapse. Already we’ve seen gains of 6%, 9%, 10%, even 12% in less than two weeks by placing well-targeted shorts on a number of European financials.

So if you’re looking for the means of profiting from what’s coming, I highly suggest you consider a subscription to Private Wealth Advisory. We’ve locked in 46 straight winning trades since late July (thanks to the timing of our trades), and haven’t closed a single losing trade since that time. And we just opened five new trades to profit from Europe’s banking collapse on Friday.

Because of the level of my analysis as well as my track record, my work has been featured in Fox Business, CNN Money, Crain’s New York Business, Rollingstone Magazine, and more. Which is why we’re raising the price of Private Wealth Advisory from $249 to $399 at the end of April. The reason? This is a premium quality newsletter than commands a premium price.