The following is an excerpt from my latest client letter.

The collapse of Europe is occurring just as I forecast. While the media and even the politicians are failing to admit it, the EU in its current form is already breaking up. Indeed, if you step back and observe things from a larger perspective, you can almost watch the process in slow motion.

The collapse is taking shape via three key developments:

1)   The Rise of Nationalism (see the recent Greek, French and German elections)

3)   The end of the dominant political alliances.

All of these developments are Euro negative. Indeed, they reveal the core problem with the EU as a concept: how can one unite very different countries with long histories of conflict under one economic and monetary regime?

The answer is that one cannot. Voters were willing to go along with the idea (or at least submit to it) while the going was good. However, now that the we’ve entered a secular downturn in global growth, particularly for the western world which suffers from massive debt overhangs and age demographic issues, we are going to see EU member states focus more on domestic issues rather than saving the “grand idea” of the Euro.

This refocusing on domestic issues is a natural political consequence of economic contraction: those politicians who implemented the measures that are now seen to be the cause of the downturn will be held accountable (see Sarkozy). New faces will enter the political arena along with “new” ideas (I use quotations because few if any politicians in the EU have a clue what they’re really dealing with).

However, now that the concept of a “union” is seen as the root cause of EU members’ economic woes, there is the risk that some of those new political faces and new political ideas will be nationalistic if not outright hostile to the concept of any union at all (see France’s first round of elections as well as Greece’s recent parliamentary elections which we’ll address later on these pages).

Regarding the rise of Nationalism, I can tell you from first hand experience that this notion is not to be dismissed. I travelled to France to witness the second round of the Presidential elections. And I can tell you that the mainstream media’s interpretation of this event is missing the point.

True, on the surface the results appear innocuous enough (France has a Socialist President again). However, it is not who won the election, but the change in political tide currently occurring in France that matters most. I’m not talking about socialism either.

Let me paint the picture.

The French election results were announced at 8PM in France. My wife and I were on the Avenue de Champs-Élysées (the road leading to the Arc de Triumph) from roughly 8:20 to 10:00PM. The below images show just what we saw: 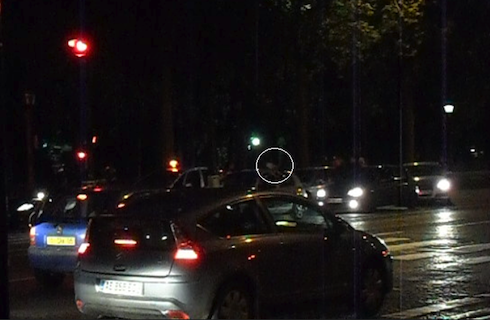 8:20PM: every single vehicle in the above image was honking its horn incessantly. Passengers in cars were waving flags (I’ve circled on in the above image) or hanging out the windows yelling and singing. However traffic was still relatively light.

Things began to reach a crescendo around 9-9:30PM. By that time the sound of car horns was deafening. The street was jammed as drivers temporarily parked their cars at intersections, then left them to cheer, yell, or simply smoke cigarettes as the young man atop the white car in the below image is doing. 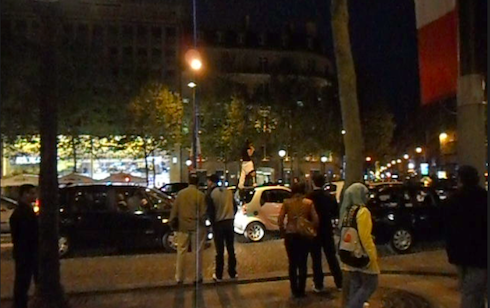 Traffic could barely move. It was as though Parisian youth decided to hold a giant block party without bothering to actually shut down the street. And while the situation never actually became riotous the underlying tensions were obvious.

Parisian youth, like most young people in the EU, have been hit hardest by the Crisis: youth unemployment across the 17 nations using the Euro is at 22%; in France it’s nearly 25%. In Spain and Greece it’s north of 50%.

The result of this is that young people feel that the political elite and older generations voted for a bunch of policies that have proven disastrous. These youth are angry. And a young angry population can very easily go from being simply “anti-the current establishment” to outright hostile very, very easily as we’ve seen in Greece.

In France, the celebration of Hollande’s victory was as much if not even more about defeating Sarkozy than electing Francoise Hollande. True, Hollande has offered some new policies to attempt to rein in youth unemployment. But these policies simply represent more of the same ideas that brought about the Crisis to begin with (more Government jobs with more benefits which increase the debt overhang).

Thus, in many regards, people see Sarkozy’s defeat as a victory for France not socialism. As one woman I spoke to put it, “I do not think it’s a dramatic change at all… it’s about getting rid of Sarkozy. He has done such terrible things to this country.”

Indeed, even the numbers show that the victory was anything but dramatic: Hollande took 51% of the vote while Sarkozy took 48%. And while the media makes a big deal of the fact that Sarkozy is only the second incumbent French President to be defeated since WWII, the fact is that France has essentially gone from one career politician who was ostentatious and outwardly classist (Sarkozy once called a French farmer a “loser” and openly associated with France’s wealthy) to one that is similarly wealthy (Hollande owns over $1.5 million in property) but simply more understated in his lifestyle.

For that reason, the victory of Francois Hollande, while having significant implications for the EU in of itself (more on this later in this issue), does not paint the full picture of what is really happening in France.

So let’s dig a little deeper.

French Presidential elections take place in two rounds. During the first round, voters will vote for anyone running. The two candidates who receive the most votes will then proceed to the second round, the winner of which will become France’s President.

Hollande and Sarkozy were the winners of the first round. But as the final tally in the second round revealed (51% vs. 48%) voters weren’t exactly thrilled with either one of them.

Instead, the major development in the French elections was the fact that the hard right, anti-Euro, anti-immigration party, the Front National Party, or NFP, took the most votes from French youth.

That is correct. When it came time to vote in round one, more French youth voted for a party whose leader wants to break up the Euro, who wants to deal with immigration by ending dual citizenship, affirmative action, and by kicking out any immigrant who cannot adhere to French principles or who commits a crime, and who once compared the legal French tolerance of Muslims praying in the streets to putting up with Nazi occupation.

Oh, and her father, who founded the NFP, wanted to do away with the concept of immigration completely and once commented that Germany’s occupation of France during WWII was “not particularly inhumane…”

That is the party that took in the most votes from French youth during round one of the French elections. And French youth were not the only ones leaning towards Nationalism.

Indeed, the NFP took in 20% of ALL French votes during the first round of the French elections. That’s a record high for the party and not far off from Sarkozy’s and Hollande’s first round showings of 25% and 28% respectively.

Again, Nationalism is on the rise in France. And it’s not over by any stretch. France will be holding elections for its lower house, the National Assembly, on June 10th and June 17th.

Right now the socialists are in the lead to win, leaving the loosely organized center-right party, Union for a Popular Movement (UMP), with the following options:

1)   Join forces with the NFP to take the control of the National Assembly, or…

2)   Hand France completely over to the Socialists

I cannot say how this will play out. But for now, we must take into account that there is a very real possibility that the NFP may take control of France’s lower house.

IF this happens and Francois Hollande proves to be a Presidential dud, then it is not a stretch to imagine that the NFP will gain even more traction in French politics.

And this is just one of numerous Euro negative developments taking place today.  On that note, if you have not taken steps to prepare for the end of the EU (and its impact on the US and global banking system), you NEED TO DO SO NOW!

With that in mind, I’m already positioning subscribers of Private Wealth Advisory for the upcoming EU collapse. Already we’ve seen gains of 6%, 9%, 10%, even 12% in less than two weeks by placing well-targeted shorts on a number of European financials.

So if you’re looking for the means of profiting from what’s coming, I highly suggest you consider a subscription to Private Wealth Advisory. We’ve locked in 55 straight winning trades since late July (thanks to the timing of our trades), and haven’t closed a single losing trade since that time.