Forget the PIIGS, Europe As a Whole Is Insolvent

Europe is heading into a full-scale disaster.

You see, the debt problems in Europe are not simply related to Greece. They are SYSTEMIC. The below chart shows the official Debt to GDP ratios for the major players in Europe. 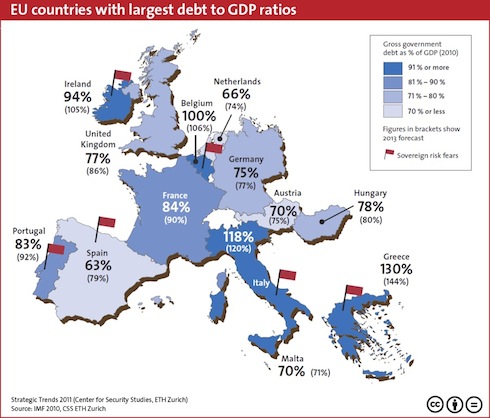 As you can see, even the more “solvent” countries like Germany and France are sporting Debt to GDP ratios of 75% and 84% respectively.

Let’s consider Germany. According to Axel Weber, former head of Germany’s Central Bank, Germany is in fact sitting on a REAL Debt to GDP ratio of over 200%. This is Germany… with unfunded liabilities equal to over TWO times its current GDP.

To put the insanity of this into perspective, Weber’s claim is akin to Ben Bernanke going  on national TV and saying that the US actually owes more than $30 trillion and that the debt ceiling is in fact a joke.

What’s truly frightening about this is that Weber is most likely being conservative here. Jagadeesh Gokhale of the Cato Institute published a paper for EuroStat in 2009 claiming Germany’s unfunded liabilities are in fact closer to 418%.

And of course, Germany has yet to recapitalize its banks.

Indeed, by the German Institute for Economic Research’s OWN admission, German banks need 147 billion Euros’ worth of new capital.

To put this number into perspective TOTAL EQUITY at the top three banks in Germany is less than 100 billion Euros.

And this is GERMANY we’re talking about: the supposed rock-solid balance sheet of Europe. How bad do you think the other, less fiscally conservative EU members are?

As you can see, financial institutions in Germany, France, Italy, Spain, the UK, and Ireland are all ticking time bombs.

Indeed, taken as a whole, European financial institutions have more debt than Europe’s ENTIRE GDP.  Let’s compare the situation there to that in the US banking system.

Taken as a whole, the US banking system is leveraged at 13 to 1. Leverage levels at the TBTFs are much much higher… but when you add them in with the 8,100+ other banks in the US, total US bank leverage is 13 to 1. 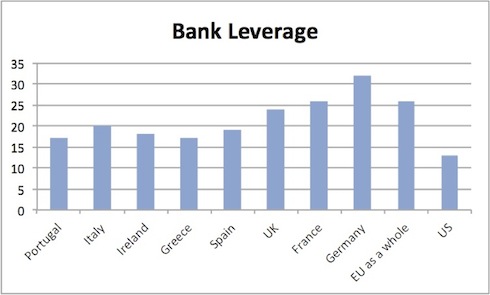 To put this into perspective, with a leverage level of 26 to 1, you only need a 4% drop in asset prices to wipe out ALL capital. What are the odds that European bank assets fall 4% in value in the near future as the PIIGS continue to collapse?

The reason that this is guaranteed to happen before the end of 2012 is that a HUGE percentage of European bank debt needs to be rolled over by the end of 2012.

I trust at this point you are beginning to see why any expansion of the EFSF or additional European bailouts is ultimately pointless: Europe’s ENTIRE BANKING SYSTEM as a whole is insolvent. Even a 4-10% drop in asset prices would wipe out ALL equity at many European banks.

On that note I believe we have at most a month or two and possibly even as little as a few weeks to prepare for the next round of the EU Crisis.

With that in mind, I’ve begun positioning subscribers of my Private Wealth Advisory for this very possibility. We’ve already locked in over 30 winning trades this year by finding “out of the way” investments few investors know about and timing our positions to benefit from the various developments in Europe.  When you combine this with our 2011 track record, we’ve had 66 straight winners and not one closed loser since July 2011.

So if you’re looking for the means of profiting from what’s coming, I highly suggest you consider a subscription to Private Wealth Advisory. I’ve been helping investors navigate risk and profit from the markets for years. I can do the same for you. Indeed, my research has been featured in RollingStone Magazine, The New York Post, CNN Money, the Glenn Beck Show, and more. And my clients include analysts and strategists at many of the largest financial firms in the world.

Indeed, interest is growing to the point that we’re not considering closing the doors on this newsletter and starting a waiting list. So if you’ve been putting off subscribing, you need to get a move on to reserve on of the remaining open slots.