Most of my recent analysis has pertained to Europe.

However, on the other side of the pond, the US economy is showing major signs of deterioration.  The jobs data, even after the BLS massages it, is awful.  Secondly, 1Q12 GDP estimates have been revised lower. We’ve also seen the two consecutive bad Philly Fed surveys, including the fact that the average workweek has shortened for two months now. We’re also seeing a drop in the Empire Manufacturing index.

Many of these are economic bell-weathers. And anyone in the financial space can tell you, companies only lower their forecasts if things are going to get a lot worse (executives are highly incentivized to maintain positive outlooks for fear of their company’s shares collapsing on downgrades).

In simple terms, we’re getting many signals that the US economy may in fact be slipping into a second recession in the context of a greater DE-pression. Once it’s confirmed that we’re back in recessionary territory (we already are, but it won’t be confirmed by Government officials until after the US Presidential election) then this will mark:

1)   The first time in the post-war period that the US has entered a recession in which industrial production failed to exceed its previous peak: 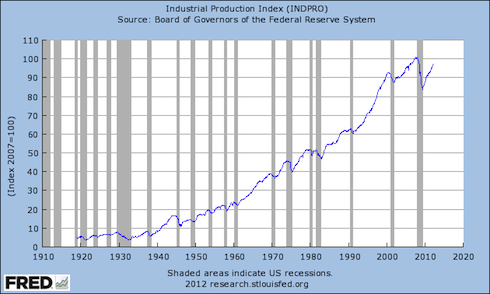 2)   The first time the US entered a recession when average unemployment duration was already at record highs: 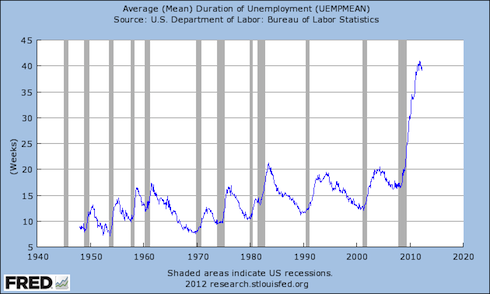 3)   Moreover, the civilian employment-population ratio is at levels not seen since the ’70-’80 (meaning that fewer and fewer Americans are in the workforce). 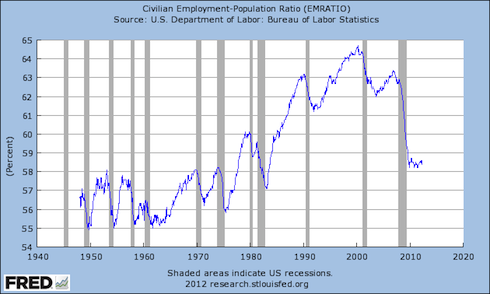 4)   And a recession in which food stamp usage is already near record highs: 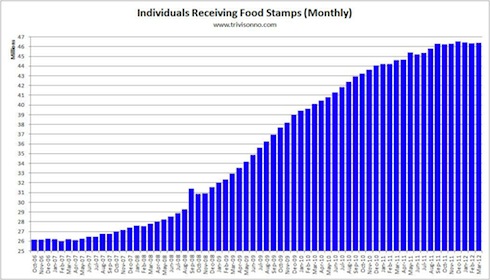 To make matters worse, all of this is happening at a time when the US Federal Reserve, which has been the life-support for the US economy (for better or for worse), is finally discovering that its policies and theories don’t actually apply to the real world:

Fed Wrestles With How Best to Bridge U.S. Credit Divide

Fed officials have been frustrated in the past year that low interest rate policies haven’t reached enough Americans to spur stronger growth, the way economics textbooks say low rates should.

By reducing interest rates—the cost of credit—the Fed encourages household spending, business investment and hiring, in addition to reducing the burden of past debts.

But the economy hasn’t been working according to script.

This confirms what I’ve been saying for months: the Fed has realized that the consequences of QE (higher cost of living) outweigh the benefits. This is why the Fed only decided to extend its Operation Twist program during its June FOMC: the political climate in the US will not tolerate a large-scale move by the Fed unless a major bank collapses or some kind of systemic risk hits.

This means… that the primary prop underneath the US stock market and financial system (namely Fed intervention) is slowly being removed. What follows will not be pretty and smart investors should be taking steps now to prepare in advance.

With that in mind, I’ve begun positioning subscribers of my Private Wealth Advisory for the next leg down. We’ve already locked in over 30 winning trades this year by finding “out of the way” investments few investors know about and timing our positions to benefit from the various developments in Europe.  When you combine this with our 2011 track record, we’ve had 65 straight winners and not one closed loser since July 2011. If you think this is sounds “too good to be true,” you can Click Here to See Our Confirmed Trades.

Indeed, we just locked in two gains of 8% and 10% in less than two weeks’ time. In fact, this track record is getting so much attention that we’ve decided to only make 100 more slots available before we close the doors on this newsletter and simply start a waiting list. Already 80 slots have been reserved, leaving just 20 left.