Europe is heading into a full-scale disaster.

You see, the debt problems in Europe are not simply related to Greece. They are SYSTEMIC. The below chart shows the official Debt to GDP ratios for the major players in Europe. 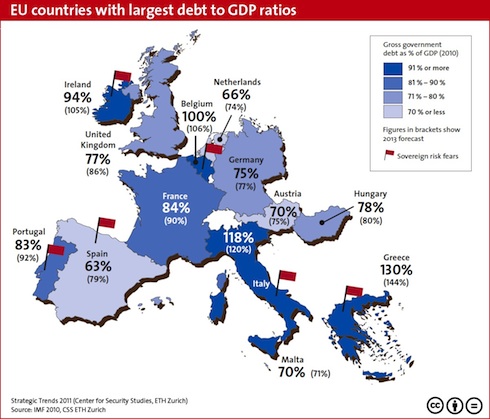 As you can see, even the more “solvent” countries like Germany and France are sporting Debt to GDP ratios of 75% and 84% respectively.

Let’s consider Germany. According to Axel Weber, the head of Germany’s Central Bank, Germany is in fact sitting on a REAL Debt to GDP ratio of over 200%. This is Germany… with unfunded liabilities equal to over TWO times its current GDP.

That’s one thing most invetsors don’t know about Europe.

To put the insanity of this into perspective, Weber’s claim is akin to Ben Bernanke going  on national TV and saying that the US actually owes more than $30 trillion and that the debt ceiling is in fact a joke.

What’s truly frightening about this is that Weber is most likely being conservative here. Jagadeesh Gokhale of the Cato Institute published a paper for EuroStat in 2009 claiming Germany’s unfunded liabilities are in fact closer to 418%.

And of course, Germany has yet to recapitalize its banks.

Indeed, by the German Institute for Economic Research’s OWN admission, German banks need 147 billion Euros’ worth of new capital.

To put this number into perspective TOTAL EQUITY at the top three banks in Germany is less than 100 billion Euros.

And this is GERMANY we’re talking about: the supposed rock-solid balance sheet of Europe. How bad do you think the other, less fiscally conservative EU members are?

As you can see, financial institutions in Germany, France, Italy, Spain, the UK, and Ireland are all ticking time bombs.

And this is only the “official” numbers. When you account for off balance sheet liabilities, bank’s are even more indebted than this!

That’s the second thing most investors don’t know about Europe.

Let’s compare the situation there to that in the US banking system.

Taken as a whole, the US banking system is leveraged at 13 to 1. Leverage levels at the TBTFs are much much higher… but when you add them in with the 8,100+ other banks in the US, total US bank leverage is 13 to 1.

To put this into perspective, with a leverage level of 26 to 1, you only need a 4% drop in asset prices to wipe out ALL capital. What are the odds that European bank assets fall 4% in value in the near future as the PIIGS continue to collapse?

And at that point the entire EU banking system collapses.

To summate, everything I’ve been writing about for nearly a year will still happen. The fact that I was early and we were stopped out of our Euro Crisis trades because the ECB promised “unlimited” bond buying right before the Fed announced QE 3 doesn’t change the ultimate outcome: the EU breaking up and a global financial meltdown.

On that note, if you are not preparing for a bloodbath in the markets, now is the time to do so. The reality is that the Central Banks are fast losing their grip on the markets. They’ll never admit this publicly, but I can assure you that Bernanke and pals are scared stiff by what’s happening in the banking system right now.

If you’re looking for someone who can help you navigate and even profit from this mess, I’m your man. My clients made money in 2008. And we’ve been playing the Euro Crisis to perfection, with our portfolio returning 34% between July 31 2011 and July 31 2012 (compared to a 2% return for the S&P 500).

Indeed, during that entire time we saw 73 winning trades and only one single loser. We’re now positioning ourselves for the next round of the Crisis with several targeted investments that will explode higher as the EU crumbles.

To find out what they are, and take steps to protect your portfolio from the inevitable collapse…