Just off the cuff, I note that:

Against this backdrop, the one remotely positive development as far as the markets are concerned is the belief that Central banks will somehow solve these problems via endless liquidity.

However, even this is now proving to be a false premise.

The problem with this is that the primary driver of stock prices over the last three years has been the anticipation of more monetary stimulus from Central Banks.

Indeed, the New York Fed itself has openly admitted that were it to remove the market moves that occurred around Fed FOMC meetings (the times when the Fed announced new programs or hinted at doing so), the S&P 500 would be at 600 today: 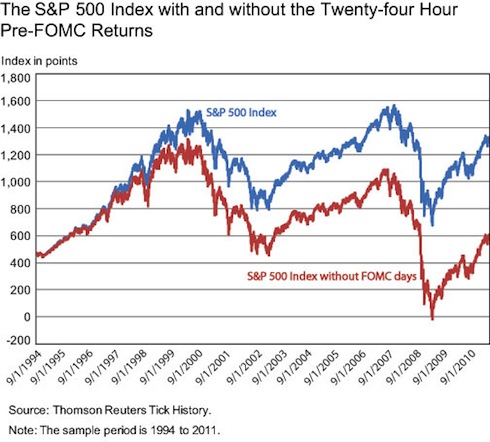 So, by announcing a program that will be on going in nature, the Fed has removed the anticipation of future Central Bank intervention from investors’ psychologies. This could become highly problematic, especially if these latest announcements turn out to be duds.

Sure enough, stocks are actually down since QE 3 was announced on September 13 2012. 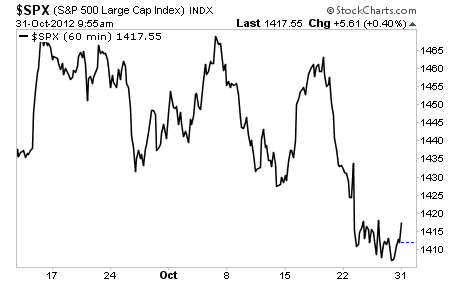 So we’ve got over 50% of the global GDP (China, the EU, and the US) in recession, combined with Europe’s banking and sovereign crisis… at the exact time that the Fed appears to have run out of ammo.

It’s truly astounding. I cannot actually remember a single time in which the global economy and financial system have faced this many difficulties. And that includes the build up to the 2008 Crash.

For that reason, we are lowering the price of an annual subscription of my Private Wealth Advisory newsletter to just $249 (down from $300).

And this incredible newsletter is now on sale at $249 for the next six days (until next Tuesday).

Because once next Tuesday hits, the price is going back up to $299 and will stay there for good.