The Obama Administration thus far has proven itself in favor of increased Government control and Central Planning. That is, the general trend throughout the last four years has been towards greater nationalization of industries (first finance, then automakers and now healthcare and insurance), as well as greater reliance on our Central Bank to maintain our finances.

Last year the US Federal Reserve bought over 70% of all US debt issuance. During this period we saw decreased buying from both China and Russia. That is a big problem because as noted before, hyperinflation unfolds when a country loses credibility in the global markets. The fact that foreigners are increasingly shunning US Treasuries is the first step in that direction.

If the Obama administration gets another turn in office, there is no indication that this trend will end. We must recall that regardless of what is said, it was Obama who re-appointed Ben Bernanke as Fed Chairman. And it was under Obama’s watch that QE lite, QE 2, Operation Twist 2, and now QE 3 were launched. It was also under Obama’s watch that the US reached a Debt to GDP ratio of over 100%.

Indeed, at no point in history has the US had this much debt during peacetime. And the fact that we’re overspending by this amount at the exact time that other countries are showing signs of shunning US Treasuries is a formula for disaster.

The line to watch is identified below. Whenever the 30-year Treasuries break below this line, we’re in ENORMOUS trouble as the 30+ year bull market in US bonds is over. 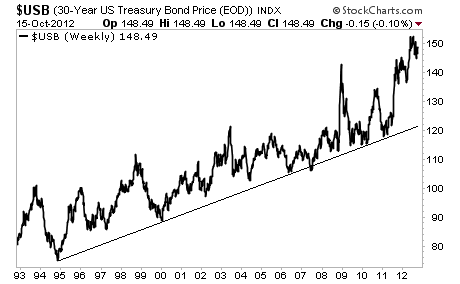 The Obama administration has used debt to finance its various programs and overspending. If Obama wins a second term, I see no indication that this will change. There have been no actionable plans proposed by the Obama administration on how to tackle the debt or deficit issues. And it’s highly likely that should Obama win in 2012, he will surround himself with the same Keynesian economists who believe that a country can spend its way back into growth.

With that in mind, it is highly likely that the US would enter a currency crisis during Obama’s second term should he win. In preparation for this, investors will want to focus on the following investment themes:

1)   Inflation hedges based on continued spending and money printing.

2)   Gold and Silver as an alternate currency based on the US Dollar falling further.

4)   Preparing for an eventual US Debt Default.

These are the big picture broad strokes of what is likely to pass if Obama wins a second term. I’ll detail the impact of a Romney candidacy tomorrow.

For that reason, we are lowering the price of an annual subscription of my Private Wealth Advisorynewsletter to just $249 (down from $300).

And this incredible newsletter is now on sale at $249 for the next six days (until next Tuesday).

Because once next Tuesday hits, the price is going back up to $299 and will stay there for good.