On Romney, Bernanke, and Rajoy

Mitt Romney has stated repeatedly that he would fire Bernanke if elected.

If this does indeed happen, then the inflation trade and QE will be finished. The market is already sensing this. Gold topped out right around the first debate when Romney began to surge in the polls: 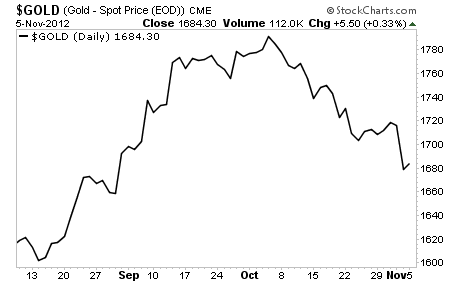 Right around that time, the US Dollar caught a bid. 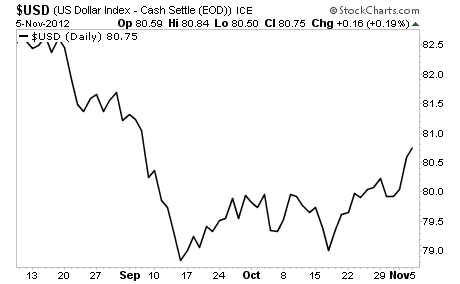 Now, I’m not saying that Romney will win the election. But the movements in Gold and the US Dollar have been suggesting that he has a good chance ever since the first debate.

This also points to problems for Europe.

For certain, no matter who wins today, Europe’s a complete disaster. Greece is once again out of money and will need someone (though at this point it’s not clear who is willing to pony up the cash) to foot the bill.

Elsewhere, Spain continues to lurch to a full-scale collapse. We now have a sovereign debt crisis exacerbated by the fact that the primary buyers of Spanish bonds (Spanish banks) are now net sellers as they are forced to sell everything to free up cash to meet Spain’s massive bank run (18% of deposits have fled the country since the start of the year).

The country recently proposed creating a bad bank to buy up €60 billion worth of bad debts. Nevermind that Spain doesn’t have €60 billion (its regional bailout fund it out of funds and even if you include the €30 billion Spain has already received from its bailout, you’re still €30 billion short).

Now Prime Minster Rajoy is wanting to know if ECB intervention will bring Spanish yields down. Was this guy not paying attention throughout 2011 when the ECB intervened constantly and Spain still saw its bonds collapse?

I’ve said it many times before and I will say it again… Spain will take down the EU. It’s only a matter of time. By Rajoy’s own admission the country needs €500 billion (realistically it’s even more than that).

And somehow someone will be able to come up with that money?

For that reason, we are lowering the price of an annual subscription of my Private Wealth Advisory newsletter to just $249 (down from $300).

And this incredible newsletter is now on sale at $249 for the next six days (until tonight at midnight).

Because tonight at midnight, the price is going back up to $299 and will stay there for good.