Countless pages have been written about why Lehman caused the system to almost implode. However, the reality is that Lehman nearly took down the entire financial system for two reasons:

1)   Lehman’s $155 billion worth of bonds were used as collateral in hundreds of billions of Dollars’ worth of trades.

2)   Lehman’s 8,000 clients who were all using Lehman to make trades saw the collateral that they had placed with the firm (to backstop their portfolios) frozen.

Lehman’s client list included some of the biggest names in the financial world. Remember that before the 2008 collapse, the big broker-dealers (Lehman, Merrill, etc) were all standalone entities (the Merrill/ BofA merger and the others had yet to happen). So all of the big banks, with few exceptions, had their collateral parked with broker dealers like Lehman.

The below story reveals that both Bank of America and Dubai’s sovereign wealth fund both saw collateral frozen when Lehman went bust. I can assure you many other big names were caught in a similar situation.

It turns out that Lehman, like other big dealers, was running a perfectly legal but highly risky game moving money from firm to firm. It used the collateral from one trading partner to fund more deals with other firms. The same $100 million collected in one deal can be used for many other transactions. “Firms basically can use [the money] as their own collateral for anything they want,” says Kenneth Kettering, a former derivatives lawyer and currently a professor at New York Law School. But when the contracts terminate as the result of bankruptcy, the extra collateral is supposed to be returned.

As part of those transactions, buyers had put up collateral in the event of losses. But weeks after Lehman’s demise, large sums of leftover collateral have yet to be returned to the trading partners. Bank of America (BAC) executives tried several times to persuade Lehman officials via e-mail and phone calls to fork over funds, according to a suit. But BofA was rebuffed. In one e-mail exchange, a Lehman employee wrote to BofA: “All activity has been suspended until further notice.”

Nasreen Bulos, a lawyer for one of Dubai’s sovereign wealth funds, got the same chilly response. The Global Strategic Equities Fund of Dubai, part of the gulf state’s $12 billion investment portfolio, gave Lehman $40 million in June as part of a deal pegged to energy giant BP’s (BP) stock. According to an affidavit, Bulos started contacting Lehman on Sept. 15 to get back $27 million in collateral. Four days later, Lehman told Bulos it would not honor the request or say anything further on the matter.

Normally, a client’s collateral would be unfrozen soon after the bankruptcy of a broker dealer. In Lehman’s case it wasn’t. And that, combined with Lehman’s $155 billion worth of bonds becoming worthless, created a severe collateral shortfall in the system.

This is why the market held together for a little over a week after Lehman went bust: the players who had collateral with Lehman thought they’d get the money freed. When they didn’t, the system imploded as collateral calls were issued. What followed was widespread liquidation as banks did everything they could to free up capital to meet funding needs or to buy new higher grade collateral (hence the skyrocketing rally in Treasuries at the time). 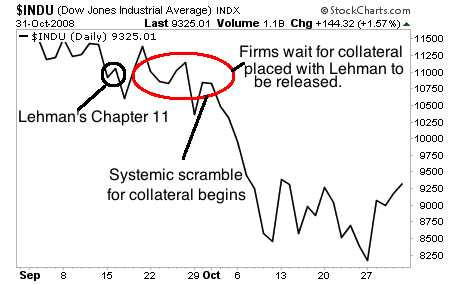 This is the reality of what happened in 2008, though few know it. And this is why a default in Spain or Italy (whose €1.78 and €1.87 trillion in sovereign bonds are collateral for likely more than €100 trillion in trades) would bring about a collapse that would make Lehman appear minor in comparison.

Remember, if Spain goes bust, they over €1 trillion in collateral would vanish triggering a chain reaction in at least €50 trillion if not €100+ trillion in trades at the large banks/ financial institutions.

Again, and I cannot stress this enough: when Spain defaults (and it will) the system will experience a collateral crunch that will be exponentially higher than that which occurred following the Lehman bankruptcy.

This is why I’ve been warning that the 2008 was just a warm-up. It’s why the Powers That Be in Europe are absolutely terrified of what’s happening there. And it’s why those investors who do not prepare in advance for what’s coming will lose everything.

If you do not want to be one of them, you need to get moving.

We have produced a FREE Special Report available to all investors titled What Europe’s Collapse Means For You and Your Savings.

This report features ten pages of material outlining our independent analysis real debt situation in Europe (numbers far worse than is publicly admitted), the true nature of the EU banking system, and the systemic risks Europe poses to investors around the world.

It also outlines a number of investments to profit from this; investments that anyone can use to take advantage of the European Debt Crisis.

PS. We also offer a FREE Special Report detailing the threat of inflation as well as two investments that will explode higher as it seeps throughout the financial system. You can pick up a copy of this report at: