If you’ve been reading me for some time, you know that Spain has already experienced a bank run equal to 18% of total deposits this year alone (another story the mainstream media is avoiding). However, what you likely don’t know is that an on annualized basis, Spain has experienced portfolio and investment outflows GREATER THAN 50% OF ITS GDP.

To give this number some context, Indonesia only saw outflows equal to 23% of its GDP during the Asian Financial Crisis. Spain is experiencing more than DOUBLE this.

I’ve long averred that Spain will be the straw to break the EU’s back. By the look of things this is not far off. The country’s regional bailout fund has only less than €1 billion in funding left. As the below chart shows, this will barely make a dent in the regions’ debt problems: 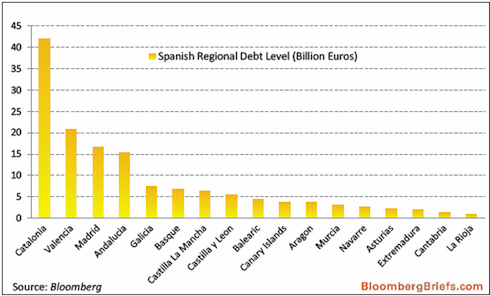 Indeed, things are far far worse than is commonly know. Valencia for instance owes its pharmacies over €500 million. In some areas there is no longer insulin.

In the region of Andalusia some government workers haven’t been paid in eight months and are working for free while begging for food.

And Catalonia is pushing to secede from Spain entirely. Indeed, its pro-secessionist leader, President Artur Mas, just won the most recent election. And over 1.5 million of Catalonia’s 7.5 million inhabitants turned out for an independence rally in September.

Again, Spain as a country is finished. Things are so bad that British Airways (many wealthy Brits vacation in Spain) is putting a contingency plan for SPAIN to leave the Euro.

Worst of all, it is clear EU and Spanish leaders have no clue how to deal with any of this. Their latest plan is for the country to cut the balance sheets of three nationalized banks by 50% sometime in the next five years. How will they do this? By dumping their toxic property assets into a “bad bank.”

The idea here is that somehow someone will want to buy this stuff. Spain already had to postpone the launch of the bad bank by a month because no one wanted to participate in it (despite the mainstream media claiming that the idea was popular which is untrue).

So, here we have Spain proposing that it can somehow unload a ton of garbage debts onto “someone” even though there is no “someone” to buy them. And the whole point of this exercise is to meet conditions so that Spain would qualify for another €40 billion in aid.

€40 billion in aid... when  Spain has experienced portfolio and investment outflows of more than €700 billion.

Indeed, things are so bad that the ECB has put the entire Spanish banking system on life support to the tune of over €400 billion Euros. To put this number into perspective, the entire equity base for every bank in Spain is only a little over €100 billion.

Oh, and the country needs to issue over €200 billion in debt next year.

If you’re an active investor looking for investment ideas on how to play this, I’ve recently unveiled a number of back-door plays designed to produce outsized gains from Europe’s next leg down. They’re available to all subscribers of my Private Wealth Advisory newsletter.