The following is an excerpt from a recent issue of Private Wealth Advisory. In it I reveal that Germany has in fact already implemented a working group to assess the cost of Greece leaving the EU. Moreover, numerous multinationals are now preparing for this outcome as well.

If you’ve looking for investment ideas on how to profit from this collapse (the gains will be even bigger than those produced during the 2008 Crash) Private Wealth Advisory can show you how. We already have a handful of EU Crisis Trades open, all of which are moving up fast.

To find out more about Private Wealth Advisory and how it can help you navigate the coming crisis… Click Here Now!!!

I believe we are at a major turning point for the financial system.

For nearly four years, the entire financial system has been held together (just barely) by extraordinary interventions on the part of the world’s Central Banks.

These interventions have resulted in capital fleeing the markets (hence the low trading volume), moral hazard becoming the norm and a marketplace in which hope of more intervention has a greater impact than the actual intervention itself.

The problem with this, from day one, was that eventually we would reach the point at which additional intervention no longer had any effect. This would come about due to:

1)   Investors having grown so accustomed to Central Bank intervention that they no longer respond to additional measures.

2)   Central Banks facing a problem so massive that it is beyond their power to stop it.

Few people understand just how close we came to #2 early this past summer. Indeed, there was a brief period there, where we were literally on the verge of systemic collapse courtesy of the Spanish banking system imploding.

It all started with the collapse of Spain’s Bankia in May 2012. Bankia was formed by merging seven smaller bankrupt banks. In early May 2012 Bankia had to be nationalized. This was a potential Lehman moment that kicked off a massive bank run and resulted in the ECB putting the entire Spanish banking system on life support to the tune of over €300 billion Euros (the entire equity base for every bank in Spain is only a little over €100 billion).

At that time, the Spanish Ibex (stock market) broke out of its 20-year bull market and nearly took down all of Europe with it. 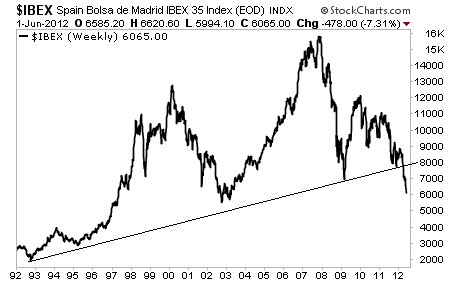 The one thing that held the system together was ECB President Mario Draghi promising that he may provide unlimited buying (which would give Spanish banks a chance to dump their assets in exchange for cash to fund liquidity needs… they were in that bad a shape). That pulled the system back from the edge and things rallied.

The ECB did indeed announce an unlimited bond buying program on September 6 2012. The Federal Reserve then announced an open-ended QE program a week later on September 13 2012.

And that’s when everything changed.

Instead of blasting off into the stratosphere, stocks fell soon after this announcement. That was the first sign that the game has changed: after every other announced program in the past four years, the markets fell briefly but then rallied hard and didn’t look back.

And so we experienced the first item I listed above (investors grew accustomed to Central Bank intervention that they no longer respond to additional measures).

We now are also experiencing #2 (Central Banks are facing a problem so massive that it is beyond the power to stop it). That problem is the fiscal cliff which Bernanke himself has admitted that the Fed cannot contain. “I don’t think the Fed has the tools to offset [the fiscal cliff].”

This is Ben Bernanke, arguably one of the most powerful if not the most powerful man in the Western financial system, admitting that the Fed doesn’t have the tools to address an issue. This has never happened before. For every single issue that has arisen going back to 2006, Bernanke claimed he had things under control.

So, we have investors now so accustomed to Central Bank intervention that even the promise of unending intervention doesn’t appease them… at the exact same time that an issue so great (the fiscal cliff) appears that even the Fed has admitted it cannot manage it.

No one is picking up on this because everyone is focusing on Black Friday and the Santa rally which I mentioned in last issue. But things have changed. And they have changed in a big way.

And no one has a clue how to deal with what’s coming.

If you’re an active investor looking for investment ideas on how to play this, I’ve recently unveiled a number of back-door plays designed to produce outsized gains from Europe’s next leg down. They’re available to all subscribers of my Private Wealth Advisory newsletter.