T-Minus 30 Days Until The US Begins Defaulting

We’ve now have just a little over 30 days until US breaches its debt ceiling.

We would have already done so, except Treasury Secretary Tim Geithner borrowed some $200 billion from emergency funds to buy a few weeks’ time (announcing that he’d be leaving his post before the actual ceiling was breached).

The “solutions” to the debt ceiling discussions range from outright insane ($1 trillion coins) to just staggeringly irresponsible (just get rid of any oversight and grow the debt without restriction).

Let us consider the facts.

The only reason the US is even having these discussions is because we’ve added $1+ trillion in debt to our balance sheet every year since 2008. The reason we were able to get away with this was because Congress hasn’t even implemented a budget since that time. Indeed, the last time a budget was even proposed (by President Obama in that case) it was rejected 97-0.

Let’s say a US family spent all of its savings and income and so began using credit cards to fund its purchases. Then, instead of implementing reforms and a budget, these folks decide to abandon any kind of tracking of their expenses and start spending even more. Eventually this family would begin to stop paying its bills.

What would you tell these folks if their proposed solution to this situation was to stop opening their mail?

At the core of this entire situation is a total lack of financial discipline. Indeed, at this point, the only thing the political class in the developed world seems to pay attention to is the bond markets: only when their bonds collapse and interest rates spike is there any sense of urgency to do anything (with massive debt loads, any increase in interest rates means hundreds of billions of dollars in more interest expenses).

On that note, the US 30-year Treasury appears to just have taken out its trendline: 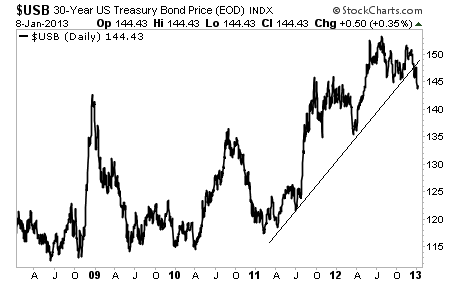 Bear in mind, the US Federal Reserve has been the primary buyer of US debt. So if the US bond market begins to collapse at a time when the Fed is already buying this much, there isn’t a whole lot the Fed can do to fix the situation (other than just buy more… which inevitably leads to a debt implosion).

This situation has the potential to get very ugly. Remember the impact the failed debt ceiling talks had on the markets in July 2011? 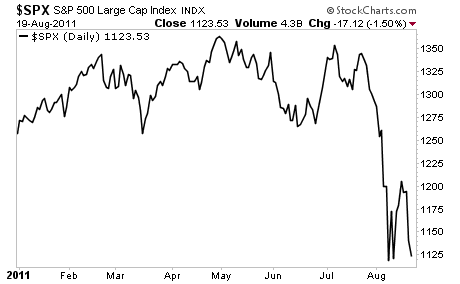 At that time, the only thing that pulled the market back from the edge was the Fed’s announcement of QE 2. But the Fed has already just announced both QE 3 and QE 4. So this option wont be around to fix the fallout if the US breaches its debt ceiling again now.

This is why, smart investors are already taking advantage of the lull in the markets to position themselves accordingly. While everyone else continues to believe the fairytale story spun by the political class and mainstream media, our Private Wealth Advisory newsletter subscribers have already been warned of these issues and are taking action (just as they did in early 2008 when others were bullish, or in 2010 when the EU crisis first began to take off).

Private Wealth Advisory outlined several critical investment strategies, designed to hedge our subscribers from the risks in the market while also alerting them to unique investment ideas that 99% of investors don’t know about.

This includes out of the way hard asset plays that are undervalued by as much as 70%, back-door investments on the US debt ceiling talks that allow individual investors to profit when the stuff hits the fan there, and more.

To find out about these investments and start positioning yourself for what we all know is coming, but no one wants to openly admit, all you need to do is take out a trial subscription to Private Wealth Advisory.

You’ll immediately be given full access to the subscribers’ only Private Wealth Advisory website where you can find the historical archives of this investment newsletter.

You’ll also begin receiving new, hot off the press, issues of Private Wealth Advisory to your inbox every other Wednesday. Running between 20 and 30 pages in length, these intensive newsletters outline an expert understanding of what’s happening in the world, in plain, easy to understand language so our subscribers have the best research presented in the clearest way possible.

In this manner, our clients are always informed about the economy, financial markets, and most importantly, their investments.