The Great Systemic Rig of 2012 is Ending

The following is an excerpt from a recent issue of Private Wealth Advisory. In it, we outline the ongoing stress in the EU banking system, particularly the issues of Spain and Greece, both of which have large banks with negative values.

Private Wealth Advisory subscribers are already gearing up for the next round of the EU crisis with several back-door trades that will profit enormously as Europe falls. To find out their names, symbols, and how to buy them… Click Here Now!

Europe’s banking system has been on the ropes for years.

It’s a little known fact that  the largest recipients of US bailouts were in fact foreign banks based in Europe. Also bear in mind that the biggest beneficiaries of QE 2 were European banks. Things got so bad in mid-2012 that the whole system lurched towards collapse. The only thing that pulled the EU back from the brink was Mario Draghi’s promise of unlimited bond buying (a promise and nothing more as the EU has yet to do any of this).

However, these efforts, like all cover‐ups, will not last. Indeed, by the look of things, Europe’s banking system is breaking down again…

Greece’s four largest banks need to boost their capital by 27.5 billion euros ($36.3 billion) after taking losses from the country’s debt swap earlier this year, the largest sovereign restructuring in history.

The above articles tell us point blank that Europe’s banking crisis is neither fixed nor even close to over. However, the numbers need some perspective: sure, €27.5 billion sounds like a lot of money, but just how big is it relative to Greece’s banks.

The entire capital base of the Greek banking system is only €22 billion.

By saying that Greek banks need €27.5 billion Greece is essentially admitting that is needs to recapitalize its entire banking system. Also, you should know that Greek banks are still sitting on €46.8 billion in bad loans.

There is a word for a banking system with a capital base of €22 billion and bad loans of €46.8. It’s INSOLVENT.

We get other signs that Europe is ready to fall back into the abyss from recent revelations concerning Spain’s sovereign bonds.

In July 2012, Spain’s ten year bond yield hit 8% even though Spain had already been granted a €100 billion bailout by the EU and the ECB had also promised to provide unlimited bond buying.

As a point of reference, remember that any yield over 7% is GAME OVER as far as funding your debt.

Then, starting in August 2012, Spain’s ten-­‐year bond yields magically began to fall. Since that time, they’ve plunged to just 5%. 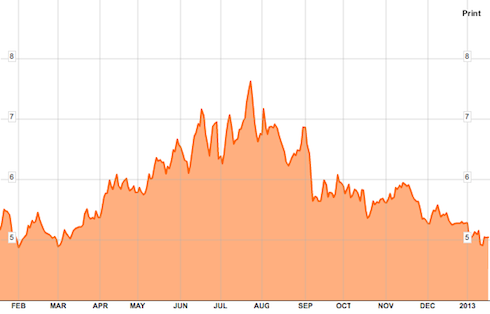 The reason for this drop in yields?

It’s not that Spain’s finances improved (its Debt to GDP ratio hit 85% this year and is on track to reach 90% by the end of 2013). Nor is it that Spain’s economy is recovering (unemployment reached a new record in 3Q12).

It’s not also that investors are less worried about Spain and have decided to buy Spanish debt (Spain just staged a terrible bond rally in early December).

So why were Spanish yields falling?

Spain has been using up its Social Security fund to buy its own debt.

Spain has been quietly tapping the country’s richest piggy bank, the Social Security Reserve Fund, as a buyer of last resort for Spanish government bonds, raising questions about the fund’s role as guarantor of future pension payouts.

Now the scarcely noticed borrowing spree, carried out amid a prolonged economic crisis, is about to end, because there is little left to take. At least 90% of the €65 billion ($85.7 billion) fund has been invested in increasingly risky Spanish debt, according to official figures, and the government has begun withdrawing cash for emergency payments.

This is precisely what we mean when we say the system was rigged in the second half of 2012. Spain, a country that is totally bankrupt and likely heading for its own version of the Arab Spring (things are so bad that Spaniards have begun self-­‐ immolating just as they did in Tunisia right before that country suffered a societal breakdown) managed to fool the world into believing that things had improved by raiding its social security fund to buy its own debt.

As we said at the beginning of this issue, the rigging that occurred in the second half of 2012 was simply staggering. But it will end. Our view is that we have perhaps another month or so left at the most before things begin to get ugly again.

This is why, smart investors are already taking advantage of the lull in the markets to position themselves accordingly. While everyone else continues to believe the fairytale story spun by the political class and mainstream media, our Private Wealth Advisory newsletter subscribers have already been warned of these issues and are taking action (just as they did in early 2008 when others were bullish, or in 2010 when the EU crisis first began to take off).

Private Wealth Advisory outlined several critical investment strategies, designed to hedge our subscribers from the risks in the market while also alerting them to unique investment ideas that 99% of investors don’t know about.

This includes out of the way hard asset plays that are undervalued by as much as 70%, back-door investments on the US debt ceiling talks that allow individual investors to profit when the stuff hits the fan there, and more.

To find out about these investments and start positioning yourself for what we all know is coming, but no one wants to openly admit, all you need to do is take out a trial subscription to Private Wealth Advisory.

You’ll immediately be given full access to the subscribers’ only Private Wealth Advisory website where you can find the historical archives of this investment newsletter.

You’ll also begin receiving new, hot off the press, issues of Private Wealth Advisory to your inbox every other Wednesday. Running between 20 and 30 pages in length, these intensive newsletters outline an expert understanding of what’s happening in the world, in plain, easy to understand language so our subscribers have the best research presented in the clearest way possible.

In this manner, our clients are always informed about the economy, financial markets, and most importantly, their investments.