The Fed is Beginning to Splinter… What Comes Next?

The following is an excerpt from our most recent issue of Private Wealth Advisory. In it we outline a recent development on the Fed’s Board of Directors. The implications of this will be severe for all asset classes.

The Fed is growing increasingly splintered as an organization.

The media hasn’t really picked up on this issue yet. But once they do things could become quite problematic for the Fed.

Remember, the primary force that has held the financial system together since the Crash of 2008 was the view that the Fed could backstop everything.

However, dissent is now growing at the Fed… which means it will be harder for it to move forward in a unified fashion.

With regard to the possible costs and risks of purchases, a number of participants expressed the concern that additional purchases could complicate the Committee’s efforts to eventually withdraw monetary policy accommodation, for example, by potentially causing inflation expectations to rise or by impairing the future implementation of monetary policy. Participants also discussed the implications of continued asset purchases for the size of the Federal Reserve’s balance sheet. Depending on the path for the balance sheet and interest rates, the Federal Reserve’s net income and its remittances to the Treasury could be significantly affected during the period of policy normalization. Participants noted that the Committee would need to continue to assess whether large purchases were having adverse effects on market functioning and financial stability. They expressed a range of views on the appropriate pace of purchases, both now and as the outlook evolved. It was agreed that both the efficacy and the costs would need to be carefully monitored and taken into account in determining the size, pace, and composition of asset purchases.

Remember, the Fed only just announced QE 3 in September 2012 and QE 4 in December 2012. At the time of these announcements, the media heralded these moves as indicating that the Fed would act aggressively forever.

And yet, today we find that the Fed was actually conflicted about announcing QE 4 and was questioning the benefits of QE the very day that QE 4 was announced. As we noted in last issue The Great Global Rig of 2012 is Ending, the schemes and policies implemented to hold the system together (including QE) are beginning to lose their effect on the system.

On that note, let us turn our attention to the Fed’s actual activity.

Since September 2011, the US Federal Reserve has announced Operation Twist (extending this beyond its original deadline) as well as QE 3 and QE 4. And yet, in spite of these numerous programs, until January 10 2013 the Fed’s balance sheet was actually smaller than it was the year before (the blue line below).

Throughout this period, the S&P 500 (the red line below) began to disconnect from the Fed’s actual activity. Note how the market continued to rally even when the Fed’s balance sheet was contracting throughout most of 2012. 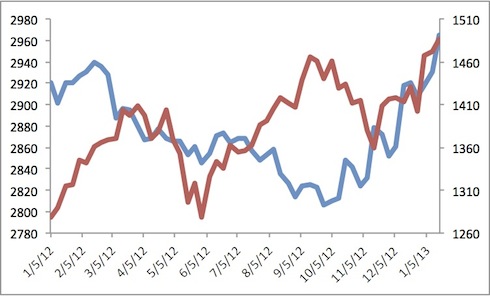 Because, starting in late 2011 and continuing to the present, the Fed has discovered that verbal intervention has the same impact as actual monetary intervention. Why actually spend the money when you can simply state on TV that you will act if needed and the markets react the same way as if you had announced a new program?

Between the end of QE 2 in June 2011 and the start of QE 3 in September 2012, the Fed resorted time and again to implying it stood ready to act at any time. Despite over eight FOMC meetings in which the Fed didn’t announce QE the markets continued to general push higher on hype and hope of more QE.

Between this, the Fed’s most recent FOMC minutes in which multiple Fed members expressed concern about the efficacy of QE, and the fact that the Fed balance sheet only just eclipsed its previous year levels on January 10 2013 (despite QE 3 and 4 being announced in the second half of 2012), we can draw some very strong conclusions:

1)   The Fed is growing splintered on how to proceed from a policy standpoint.

2)   This splintering will have political implications (Bernanke will likely step down at the end of his term in early 2014, if not before)

3)   This splintering will have major financial implications for every asset class  particularly stocks which have become completely disconnected from economic realities.

This is precisely the sort of “unquantifiable” investment analysis we specialize in with our Private Wealth Advisory newsletter.

With most of the markets dominated by computer programs and Wall Street sharks, the only way to make serious money is by focusing on the opportunities and risks that no computer or group-think Wall Streeter can come up with. If you can do this, you can still making a killing in the markets.

By focusing on investment ideas and portfolio risks that are “unquantifiable” we’ve shown  Private Wealth Advisory a success rate of OVER 80% on our investments.

Put another way, we’ve made money on more than eight out of ten investments. This includes a 74 trade-winning streak (from July 2011-July 2012 we didn’t close a single losing trade).

Indeed, I’m so confident in this newsletter that it comes with a 30-day refund period. If you’re not totally satisfied with Private Wealth Advisory in the first month, simply drop us a line and we’ll refund every cent of your subscription.

You’ll have full access to the Private Wealth Advisory archives in that time. You’ll also receive two new hot off the press issues and very likely several trade signals (it’s getting close to time to close out our 7th and 8th  winners for the year).