Europe is Fixed? Just Like Wall Street Was “Fixed” in May 2008, How’d That Turn Out?

In 2008, as the financial crisis picked up steam, one by one the big bank Wall Street CEOs came forward to assure everyone that “everything is fine” and that their banks were “well capitalized.”

Anyone who did a bit of actual research knew this was not the case. But a large component of corporate (and political) leadership is to maintain confidence and calm no matter how bad things get.

As a result of this, in May 2008 alone, executives at Citigroup, Goldman Sachs, JP Morgan, Lehman Brothers, and Merrill Lynch all stated that the worst was over for financials.  That’s right, in just one month executives at ALL of these firms issued proclamations that everything was just dandy for the banks.

The market took about five months to realize the truth, at which point these firms imploded taking the market with them.

I bring this up because we’re seeing this same game played out on a much larger scale in Europe today. Starting in November, various political bigwigs from the EU, whether it be Germany’s Finance Minister Wolfgang Schauble, France’s Prime Minister Francois Hollande, of Spain’s Prime Minister Mariano Rajoy have all stated that the EU Crisis is either over… or that at least the worst of it is over.

It’s rather incredible when you consider the complete and utter failure of these folks to solve the debt problems for a country as small as Greece (which makes up only 2% of the EU’s GDP).

Greece entered a crisis in 2010. Three years later, its major banks are STILL insolvent, the Greece economy has contracted over 20% (the sort of collapse Argentina saw in 2001 when its entire financial system failed), and nothing has been fixed.

So… the EU, with the help of the ECB, IMF, and the US Fed (QE 2 and 4 were basically EU bank bailouts in disguise), COULDN’T SOLVE GREECE’S PROBLEMS. And we’re supposed to believe that these folks can solve Spain, Italy or even France’s!?!

Let’s cut through the crap here.

The European banking system is a complete and total disaster. Remember how bad Wall Street was in 2008? Europe’s banks are many multiples worse than that. The US at least recapitalized its banking system after the Crisis.

Europe hasn’t. At all. That’s right, the banks in Europe have not raised capital to bring down their leverage rations, which is why the ENTIRE EU BANKING SYSTEM IS LEVERAGED AT 26 TO 1.

In the run up to the Spanish banking crisis, Spain sported a housing bubble that DWARFED the US’s. Spain is the DARK blue line in the chart below. The US housing bubble is the little green lump below it. 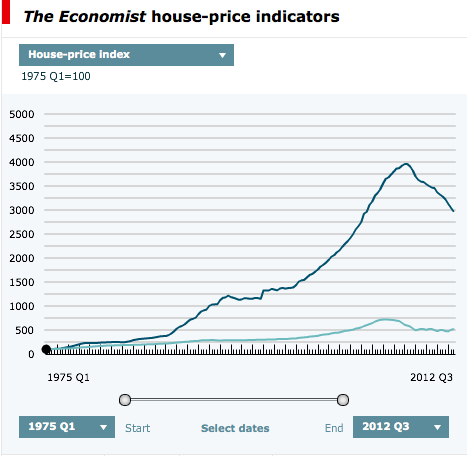 How does a housing bubble get that out of control? By banks lending to anyone with a pulse. Indeed, a little know fact is that the banks sitting on 56% of the Spanish mortgage market were TOTALLY unregulated up until about 2010. As bad as US lending standards leading up to our housing bust, Spain had us beat by many multiples as the above chart illustrates.

The Spanish Government’s solution to this mess was to merge one garbage bank with another. They’ve been doing this for three years… but the Spanish banking system remains screwed up beyond anyone’s comprehension.

The bank was touted as a success story, posting a profit in 2011 and even considering paying a dividend. Then the following happened in 2012…

As a summary… Bankia was considered profitable in 2011… it was actually talking about paying out a dividend in April 2012. And in the following eight months, it was discovered that the bank was not only un-profitable, but completely and totally insolvent.

Today, nine months later, the bank has swallowed up over €19 billion in bailouts and still has a NEGATIVE value. With the additional €13.5 billion Spain claims it needs (assuming that is the actual limit… which I doubt) the bank will have consumed over €32 billion in bailouts.

If you think Bankia is an isolated incident, you’re out of your mind.

The point of this? Europe’s banks are totally insolvent and have not been fixed. No EU leader is going to tell you this because their jobs depend on convincing people that everything is fine. Bankia was supposedly “fine” right up until the truth came out. Just like the Wall Street banks were “fine” going into 2008.

I know the markets have yet to fully realize this…the S&P 500 is approaching its all-time highs. But back in late 2007, the last time the markets were at this level… did stocks get what was coming then too? Nope. And by the time stocks “got it” things moved VERY quickly.

So if you have not already taken steps to prepare for systemic failure, you NEED to do so NOW. We’re literally at most a few months, and very likely just a few weeks from Europe’s banks imploding, potentially taking down the financial system with them. Think I’m joking? The Fed is pumping hundreds of BILLIONS of dollars into EU banks right now trying to stop this from happening.

I’ve already alerted Private Wealth Advisory  subscribers to 6 trades that will all produce HUGE profits as this mess collapses.

We’ve also taken steps to prepare our loved ones and personal finances for systemic risk with my Protect Your Family, Protect  Your Savings,  and Protect Your Portfolio Special Reports.

You’ll immediate be given access to the Private Wealth Advisory archives, including my Protect Your Family,Protect Your Savings, and Protect Your Portfolio reports.

You’ll also join my private client list in receive my bi-weekly market commentaries as well as my real time investment alerts, telling you exactly when to buy and sell an investment and what prices to pay.

So you get my hard hitting market insights, actionable investment recommendations, and real time trade alerts, for one full year, for just $299.99.